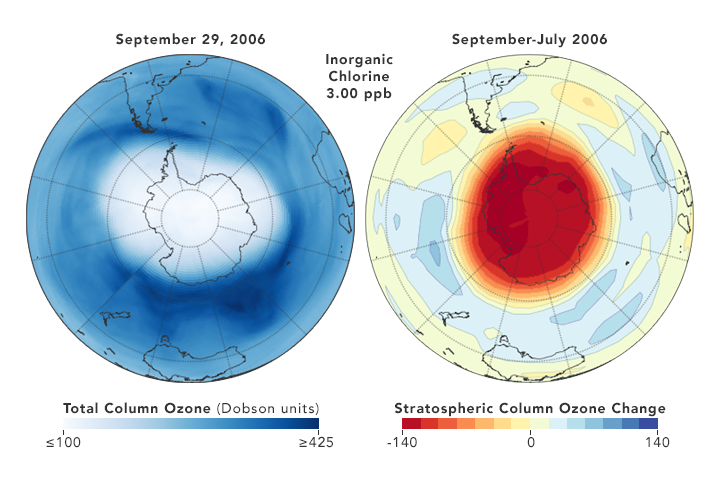 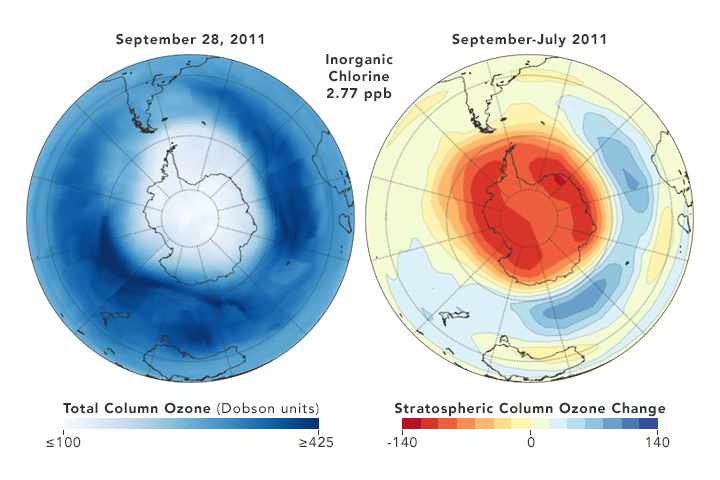 Earth’s ozone layer is slowly healing, and we now have proof that policy decisions have helped.

Ever since the Montreal Protocol was drafted in the late 1980s, scientists and policymakers have been looking for signs that their legal curbs on chlorine compounds and related chemicals were stopping the depletion of the ozone layer. They have tracked the amount of chlorofluorocarbons (CFCs) being used in industry and commercial products, while also measuring airborne concentrations near Earth’s surface. They have deployed balloons, instrumented airplanes, and satellites to observe stratospheric ozone over the South Pole (in particular) and around the world.

In each case, they have seen signs of improvement. The concentration of CFCs and other ozone-depleting substances near the ground has decreased, as industry has found replacement chemicals that are less damaging to the atmosphere. The size of the annual ozone hole over Antarctica also has stabilized. Statistical analyses have shown that it peaked in the first half of the 2000s and became less extreme, though there are still large fluctuations from year to year.

But until recently, scientists had not directly measured chlorine compounds at the place where they matter most: inside the ozone hole over the South Pole. New research findings from Susan Strahan and Anne Douglass of NASA’s Goddard Space Flight Center now show that the amount of chlorine in the stratosphere over the South Pole is declining, and that it is happening in conjunction with years of less ozone loss.

This coincidence matters because the severity of an ozone hole in any given year can fluctuate a lot due to weather. Warmer stratospheric temperatures mean less ozone loss and smaller holes, while cooler temperatures breed larger holes and greater ozone loss. Scientists have wanted to know if the Montreal Protocol’s limits on chlorine products were actually driving incremental improvements in the skies over the South Pole.

CFCs were once used for refrigeration, air conditioning cooling, propellants, and solvents. In the 1970s and 80s, these chemicals were found to be accumulating in Earth’s stratosphere, where sunlight breaks them into components that destroy ozone. The ozone layer naturally absorbs ultraviolet radiation from the Sun, so less ozone in the stratosphere means greater risks for sunburn, skin cancer, and cataracts.

The images above depict the atmospheric chlorine reductions as observed by Strahan and Douglass. The globes on the left show the size, shape, and depth of the polar ozone hole in September 2006 and September 2011. The globes on the right show how much ozone was lost each year between July and September; less red and orange means less ozone loss during the southern winter. Note that the numbers between the globes give the averaged concentrations of hydrogen chloride (HCl) in the Antarctic lower stratosphere each year: 3 parts per billion (ppb) in 2006 versus 2.77 ppb in 2011. HCl is produced in the stratosphere when CFCs break down, so less HCl means lower CFCs levels.

The researchers made their discovery with the help of the Microwave Limb Sounder (MLS) on NASA’s Aura satellite. While many satellite instruments require sunlight to measure atmospheric trace gases, MLS detects microwave emissions. As a result, it can measure trace gases over Antarctica during the dark southern winter, when the stratospheric weather is quiet and temperatures are low and stable. This is the best time to detect the effects of chlorine.

In their analysis, Strahan and Douglass found that ozone loss declined by about 20 percent between 2005 and 2016, and the level of hydrogen chloride (HCl) inside the ozone hole had fallen about 9 percent. Most importantly, they found that the reductions in atmospheric HCl coincided with years of less ozone loss.

“The ozone hole is recovering, ozone loss is declining, and it is because of declining chlorine,” said Strahan, an atmospheric chemist for NASA.

Looking forward, the Antarctic ozone hole should continue to recover gradually as CFCs leave the atmosphere, but complete recovery will take decades. “CFCs have lifetimes from 50 to 100 years, so they linger in the atmosphere for a very long time,” said Douglass, also an atmospheric chemist at NASA. “As far as the ozone hole being gone, we are looking at 2060 or 2080. And even then, there might still be a small hole.”

New research from NASA scientists shows that the amount of chlorine in the stratosphere over the South Pole is declining at the same time that ozone holes are becoming less severe.