Signs of Flow Atop Antarctic Ice 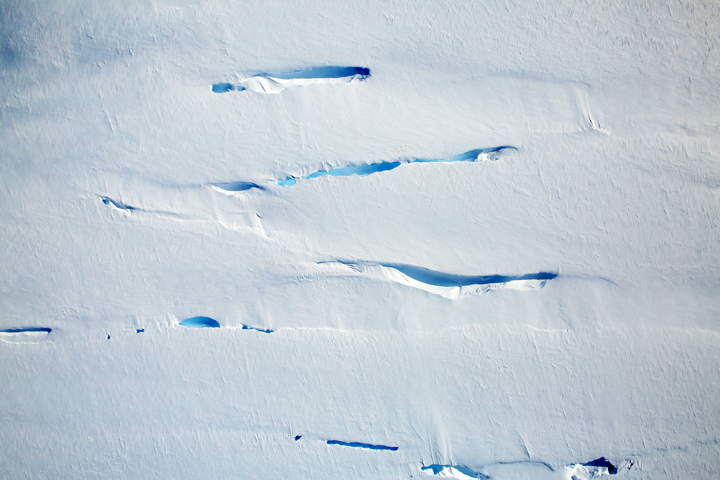 Today’s Image of the Day includes excerpts from our recent feature: Flying for Science, Finding Beauty.

Stand on the Antarctic Peninsula and a stark expanse of ice would extend as far as the eye can see. Depending on your location, you might see some texture in the ice and possibly crevasses. When we view this landscape from the air, it becomes clear that there are striking variations in these fractures.

On November 3, 2017, a NASA crew guided a P3 research plane over the southern Antarctic Peninsula during a flight for Operation IceBridge. The mission was part of the ninth year of annual flights over Antarctica to map snow and ice. These photos were acquired that day by the Digital Mapping System, a downward-pointing camera that collects thousands of high-resolution photographs during a single flight.

The reason for the brittle appearance is similar to the phenomenon of river rapids, which become amplified as water flows through steep, narrow terrain. As ice flows through narrower canyons and down steeper bedrock, more fractures open up at the surface. But ice flows much slower than water, and fractures on the ice are often the only perceptible indication of movement.

The first image shows ice flowing into the southern part of the George VI ice shelf, south of the Seward Mountains in Palmer Land. The cracks are likely a semi-permanent feature of the landscape that occurs as ice flows over the bedrock. Ice flow is relatively slow even on this steeper part of bedrock; most of the ice loss from this part of the shelf is happening at its northern end. 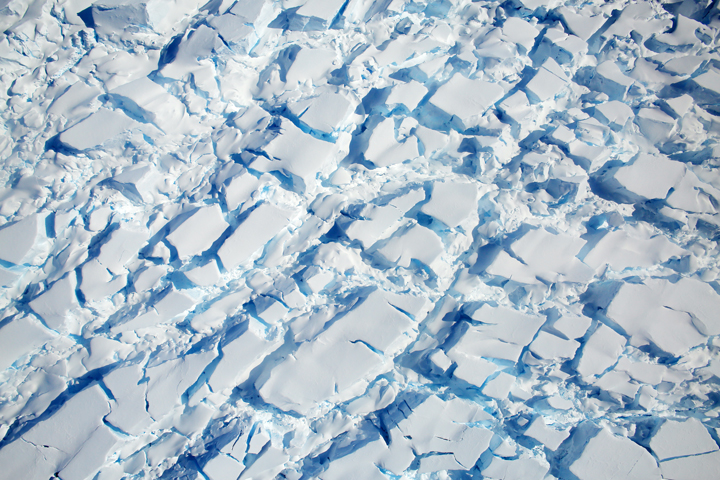 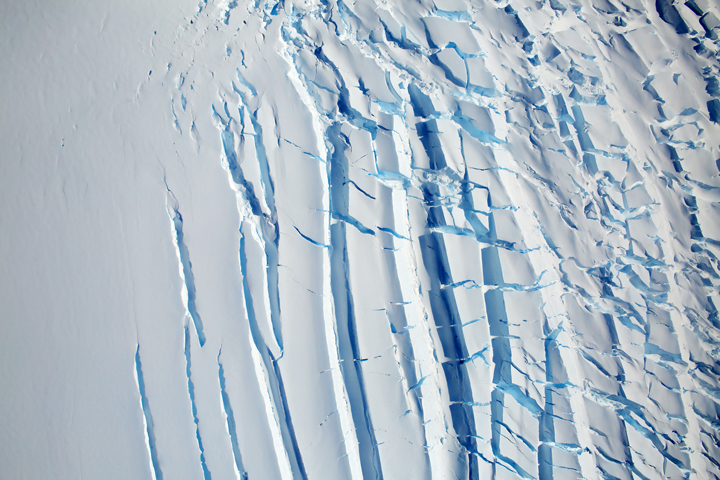 The second image shows a heavily crevassed glacier, about 13 miles long and 7 miles wide, flowing west from the Dyer Plateau to George VI Sound. The north side of this glacier merges with Meiklejohn Glacier.

Ice moves slowly, and fractures are often the only perceptible indication of movement.

Approaching the icy continent by aircraft, the vast expanse of water and ice is suddenly broken by gray and brown rocky mountaintops

Bottoms Up for Antarctic Ice

Researchers working in Antarctica have found evidence of large-scale ice making at the bottom of that continent's massive ice sheets.