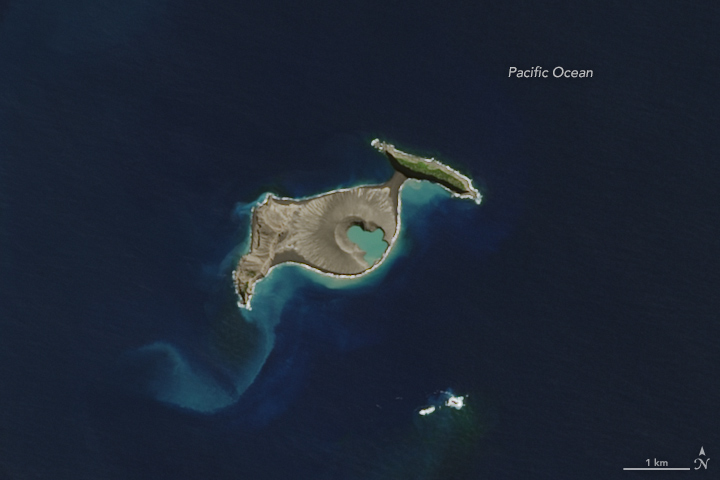 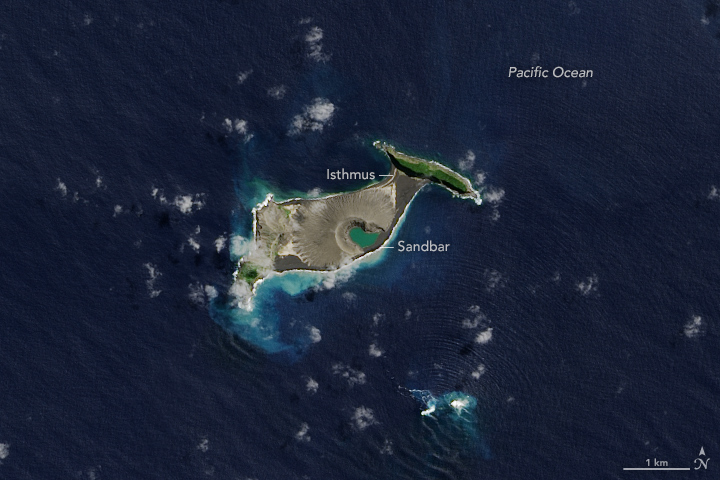 In December 2014, a submarine volcano erupted violently in the South Pacific, sending superheated steam, ash, and rock 9 kilometers (30,000 feet) into the air. When the plume cleared and the ash settled in January 2015, a newborn island with a 120-meter (400-foot) summit was nestled between two older islands in the kingdom of Tonga.

Unofficially known as Hunga Tonga-Hunga Ha’apai, the newly formed island was expected to last for just a few months. It now appears to have a 6- to 30-year lease on life, according to a NASA-led study.

Though the volcano is quite remote, satellite imagery has given scientists an unprecedented opportunity to observe the formation, erosion, and evolution of “surtseyan” islands. Surtsey rose from the seafloor off of Iceland in 1963 during an explosive submarine eruption. Only a few such eruptions have occurred in the modern scientific era (the past 150 years), and the 2015 event in Tonga is the first to be extensively observed by satellites. Understanding the processes that build and erode such islands on Earth could provide insights on similar features on Mars.

Surtseyan events are distinguished by chemical reactions that alter fragile and easily eroded volcanic rock into a tougher material—literally called “tuff.” In these highly explosive eruptions, seawater becomes superheated as it mixes with magma. It then rapidly converts to steam, expanding and fragmenting the magma into fine grains of ash. The result is a mass of rock that is much more like concrete than typical volcanic rock.

Since the emergence of Hunga Tonga-Hunga Ha’apai above the water line in 2015, it has been tracked regularly through satellite observations by optical sensors and radar (which can penetrate cloud cover in the often-cloudy tropics). NASA scientists were first alerted to the eruption when it was observed by the Moderate Resolution Imaging Spectroradiometer (MODIS) instruments on NASA satellites. A team of researchers then requested regular measurements and high-resolution images by a combination of government and commercial satellites.

Researchers assembled that data into three-dimensional maps of the island’s topography, its changing coastlines and area, and the volume of rock and ash above sea level. The analysis was presented on December 11, 2017, at the fall meeting of American Geophysical Union.

“Volcanic islands are some of the simplest landforms to make,” said first author Jim Garvin, chief scientist of NASA’s Goddard Space Flight Center. “Our interest is to calculate how much the three-dimensional landscape changes over time, particularly its volume, which has only been measured a few times at other such islands. It is the first step to understanding erosion rates and processes and deciphering why the island has persisted longer than most people expected.”

The images above were acquired in April 2015 and September 2017 by the Operational Land Imager on the Landsat 8 satellite. The animation below is a composite of images from several satellites, and it shows the evolution of the island. Note how the shape of Hunga Tonga-Hunga Ha’apai flattens and becomes less round over the years. The isthmus, or land bridge, between the new island and Hunga Tonga (to the northeast) also grows wider.

The team has calculated two scenarios for the future of the island. The first includes accelerated erosion by waves, which could destabilize the tuff cone in six to seven years, leaving only the land bridge between the two adjacent, older islands. The second scenario presumes a slower erosion rate and leaves the tuff cone intact for about 25 to 30 years.

The most dramatic changes to the island occurred in its first six months. “Those cliffs of volcanic ash are pretty unstable,” said remote sensing specialist and co-author Dan Slayback of NASA Goddard. In early May 2015, the Pacific Ocean washed over the southeastern rim of the interior crater wall, opening the crater lake to the ocean. At that point, both Garvin and Slayback thought the island might rapidly disappear. But by June 2015, a sandbar had formed and closed off the crater lake. While the island continued to evolve, it became more stable by late 2015. Wave action has slowly redistributed eroded sediment from receding cliffs on the southern side of the island, forming and shoring up the isthmus to Hunga Tonga.

The new island and its older neighbors are perched on the north rim of the caldera of a much larger underwater volcano. According to bathymetry measurements led by geologist and co-author Vicki Ferrini of the Lamont-Doherty Earth Observatory, the entire volcanic complex rises nearly 1,400 meters (4,593 feet) from the sea floor. Underwater, the base of the new volcanic dome extends about 1 kilometer (0.6 miles) from the shoreline into the floor of the larger caldera, which is about 5 kilometers (3 miles) across. In the shallows close to the southern side of island, the seafloor levels out into a nearly flat shelf, which may help explain the persistence of the new tuff cone and the redistribution for the eroded material.

Evidence of past eruptions from other, smaller domes are also apparent around the rim of the caldera, though few break the surface. “There’s a huge amount of material that came out from this eruption, possibly larger than at Surtsey,” said Ferrini. “The other interesting thing is that the two islands that surround this new land mass have some pretty tough substrate, so there’s something happening chemically to help make this solidify and stay in place.”

Garvin and Ferrini and colleagues will continue to track the new island. They also hope to assemble a detailed chemical analysis of rock samples from the site.

The Tongan island could help researchers understand volcanic features on Mars that look similar. “Everything we learn about what we see on Mars is based on the experience of interpreting Earth phenomena,” Garvin said. “We think there were eruptions on Mars at a time when there were areas of persistent surface water. We may be able to use this new island and its evolution as a way of testing whether any of those represented an oceanic environment or ephemeral lake environment.”

Making a Connection in the Kingdom of Tonga

Against the odds, the landmass that exploded and oozed into existence in early 2015 is now nearly five years old.