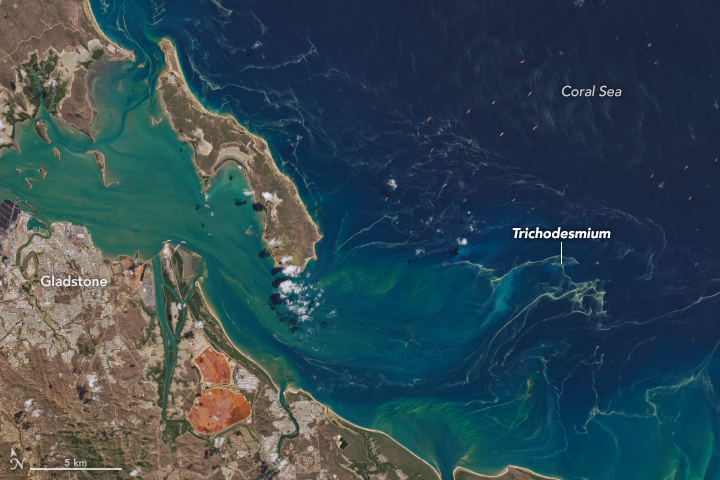 On September 11, 2017, the Operational Land Imager (OLI) on Landsat 8 acquired this natural-color image of the waters near Gladstone, Australia. Small red and white rectangles offshore appear to be ships headed into or out of the port, which is one of Queensland’s largest. Along the way, those ships cross green and tan lines on the sea surface—likely blooms of marine algae clumping along the edges of water masses and wave fronts in the Coral Sea.

The blooms are likely to be Trichodesmium spp., a microscopic, photosynthetic cyanobacteria that aggregates into long strands on the sea surface. They are ubiquitous around the world, and they tend to bloom off the coast of Queensland between August and December as the water warms. Some evidence suggests that Trichodesmium blooms here are happening earlier and more often in recent years.

From a ship or the shoreline, these blooms look like dirty brown or green stripes on the water and like an oil slick when they hit the beach. Such blooms off the Australian coast were reported two centuries ago by Captain James Cook and by Charles Darwin. Sailors have long referred to the blooms as sea sawdust or sea scum. They are mostly harmless to humans, though they produce a foul, fishy smell as they decay. When blooms are especially large, they can deplete the oxygen content of sea waters, leading to fish kills.

Trichodesmium play an important role in the ocean because they convert nitrogen gas from the atmosphere to ammonia, a fertilizer that plants can use to grow. Researchers from the University of Bristol have proposed that the evolution of nitrogen-fixing photosynthetic cyanobacteria about 800 million years ago may have helped tip the balance of carbon, nitrogen, and oxygen in the atmosphere and ocean enough to promote the development of higher life forms. Nitrogen-fixers can draw nitrogen straight from the atmosphere and turn it into nutrients while also releasing oxygen. So in effect, they fertilize the ocean for other phytoplankton while boosting the oxygen content of the air.

The waters off of Australia hosted an apparent bloom of Trichodesmium, an ancient, important, and ubiquitous type of microscopic sea life. 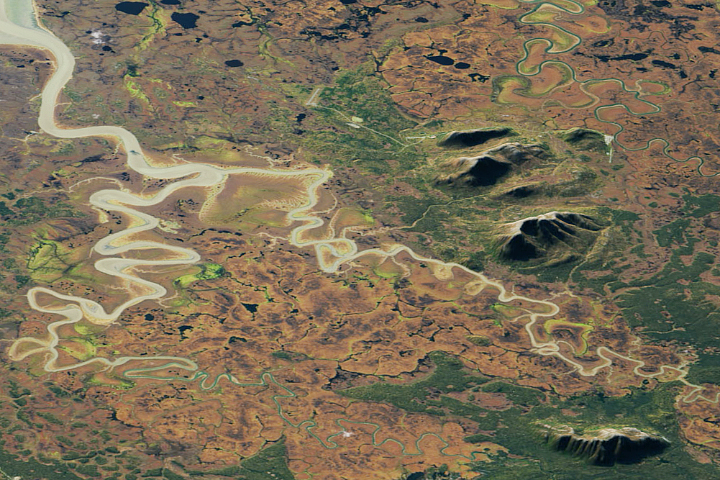 A Bloom of Nitrogen-Fixing Bacteria

An important player in the nitrogen cycle, Trichodesmium makes a seasonal appearance off the northeast coast of Australia.

Beguiling Bloom in The Baltic Sea