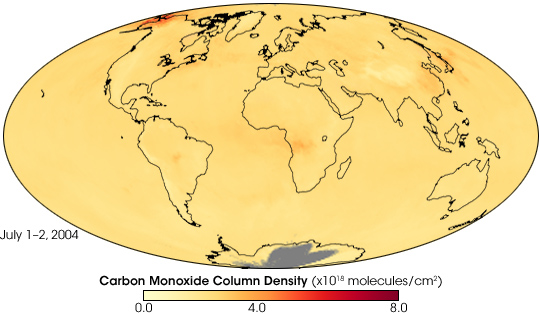 In early July 2004, wildfires raged across Alaska, and smoke blew far out to sea. Besides smoke visible to human eyes, the fires produced something else: carbon monoxide. Carbon monoxide is long-lived, and air currents can carry the gas great distances. Because it persists for a long time, carbon monoxide is an effective tracer for the global spread of fire-related pollution.

This global map shows the total column density of carbon monoxide resulting from Alaskan fires in the first two days of July 2004. It is based on observations by the Atmospheric Infrared Sounder (AIRS) on NASA’s Aqua satellite. Carbon monoxide intensity ranges from low (yellow) to high (red), with the highest amount concentrated over Alaska.

Carbon monoxide gas results from the incomplete burning of some solids, liquids, or gases. It is tasteless, odorless, and colorless, and in high concentrations, it is a human health hazard. At ground level, high concentrations (higher than those recorded by AIRS) can be fatal to oxygen-breathing organisms. At lower, non-lethal concentrations, carbon monoxide can contribute to the formation of ground-level ozone, which poses its own set of hazards. However, carbon monoxide does not readily react with other chemicals, so it does not easily harm plants or corrode materials. The gas naturally occurs in low concentrations in Earth’s atmosphere. Human activities such as running automobiles and other burning of fossil fuels also produce the gas.

Concentrations of the gas, which is produced by burning carbon-based fuels, have decreased since 2000.

This image, made with data from the Terra satellite, shows high levels of carbon monoxide over western Russia during the first week of August 2010.