Cruising Through the Bay of Kotor 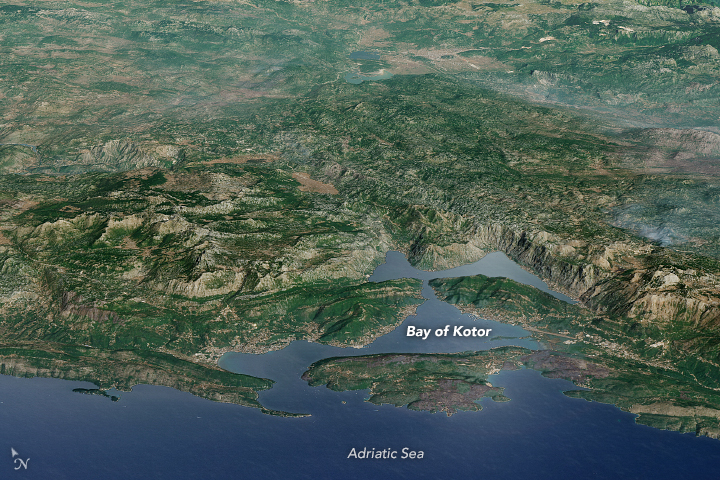 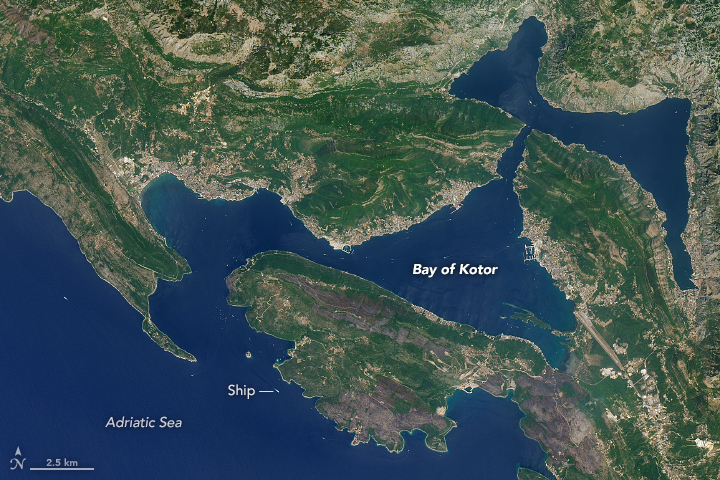 At first glance, the Bay of Kotor seems like a fjord. Steep, rocky mountains flank a winding network of interconnected inlets and bays that are deep and wide enough for large ships to navigate. However, the four distinctive water-filled valleys were not sculpted by glaciers. Rather, this remarkably serpentine section of Montenegro’s coast traces the course of an old river canyon that was submerged long ago when Adriatic Sea levels rose and tectonic forces drove the surrounding mountains upward.

The stark mashup of water and mountains—decorated by tufts of olive, oleander, laurel, pomegranate, and other trees—has long impressed visitors. The English poet Lord Byron said this of the bay: “At the moment of the creation of our planet, the most beautiful merging of land and sea occurred at the Montenegrin seaside...When the pearls of nature were sworn, an abundance of them were strewn all over this area.”

In the modern era, the compelling scenery—and an abundance of old churches, palaces, seaside villages, and historic military fortifications—has turned the area into a major tourist destination. The town of Kotor (population 22,000) now hosts hundreds of thousands of tourists each year.

Many of these visitors arrive by cruise ship. In 2017, more than 493 ships dropped anchor near Kotor, bringing 535,000 tourists to the town. That made Kotor the third most trafficked port for cruise ships in the Adriatic—surpassed only by Venice, Italy, and Dubrovnik, Croatia.

The Operational Land Imager (OLI) on Landsat 8 captured an image of the Bay of Kotor on August 11, 2017. The top image was draped over terrain data from the Advanced Spaceborne Thermal Emission and Reflection Radiometer (ASTER) on Terra to highlight the topography. In the second image, notice that several ships and smaller boats are visible. Download the large image to see wakes and other surface slicks behind the ships.

The stunning scenery in this bay in Montenegro has made it a popular destination for cruises ships.

According to legend, the Mother Dragon and her children landed at Hạ Long Bay and Bai Tu Long Bay to protect Vietnam.

High and Low Tides in Bay of Fundy