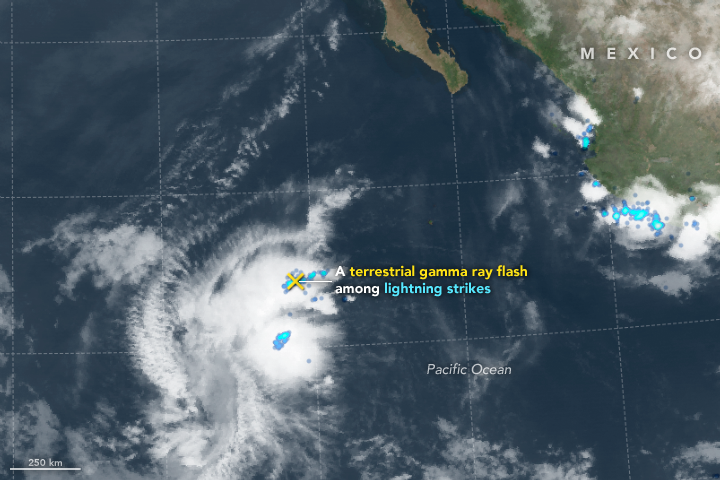 On August 3, 2014, showers and thunderstorms grew from an area of low pressure several hundred miles southwest of Manzanillo, Mexico. That tropical depression eventually strengthened into Hurricane Julio and passed north of Hawaii. The system stirred up surf, but was not otherwise notable—except that it happened to produce some very curious flashes of light.

The flashes—known as terrestrial gamma ray flashes (TGFs)—are some of the highest-energy light occurring naturally on Earth. From space, scientists have detected them amid the thunderstorms associated with tropical cyclones. The energy produced in a TGF can reach 40 mega-electron volts, or about as much radiation as 400 chest X rays.

Like ultraviolet radiation or X rays, gamma rays are not visible to the naked eye. (They lie beyond ultraviolet and X rays on the electromagnetic spectrum.) The term “flash” in TGF refers to the short, bright nature of the events. Their fleeting duration (about 300 microseconds) and high intensity make them a challenge to study. In fact, the phenomenon remained unknown until first reported in 1994.

Today, scientists continue TGF observations with instruments including the Gamma-ray Burst Monitor (GBM) on NASA’s Fermi Gamma-ray Space Telescope. With sweeping coverage of the celestial sky, the instrument primarily detects bursts of gamma rays that come from energetic explosions in distant galaxies. But since its launch in 2008, Fermi has also detected more than 4,000 TGFs arising in Earth’s atmosphere. One third of those have been pinpointed to individual storms.

Scientists think the electric field within lightning storms causes electrons to accelerate upward in the atmosphere at speeds approaching that of light, which results in a so-called “electron avalanche.” As the electrons zip past air molecules, they are deflected, which causes them to emit gamma rays.

“We think we may understand how such high-energy events could be generated in thunderstorms—our own natural particle accelerators,” said Oliver Roberts of NASA’s Marshall Space Flight Center (formerly at University College Dublin). “But if the electric field was disrupted by the high horizontal winds anticipated in tropical storm systems, does that mean we detect any TGFs at all? Are the intrinsic properties of TGFs from tropical storms different from coastal or continental storms, which have been studied already?”

To find how a storm’s activity, strength, and life cycle relate to the production of TGFs, Roberts and colleagues first used Fermi to identify 37 TGFs stemming from tropical storm systems. Once a TGF was identified, they looked at data from very-low frequency (VLF) radio receivers positioned on the ground to determine the precise location of the flash.

In the image above, the X marks where a TGF was detected at 1:31 a.m. Pacific Daylight Time (08:31 Universal Time) on August 3, 2014, over the Pacific Ocean west of Mexico. Teal-blue areas indicate where lightning was detected within a 10-minute window around the event. Julio—still a tropical wave at the time—produced four TGFs within 100 minutes that day.

“Julio was a really interesting case in that we did not expect so many TGFs to come from what was a weak storm at the time,” Roberts said. “The number of TGFs from an individual intensifying tropical storm system was unprecedented.”

The researchers learned that weaker storms could have TGFs occur anywhere within the storm, whereas more developed storms (hurricanes and typhoons) generated TGFs primarily in their outermost rain bands. And most of the tropical storms that produced TGFs did so while they were intensifying.

“As a storm intensifies as Julio did, lots of lightning is produced, so the chance of TGFs being produced is higher in that respect,” Roberts said. “But we still are not sure why Julio produced so many TGFs in such a short space of time.”

Researchers are also unsure whether TGFs can affect aviation, an area of active research. TGFs have been found to flash upward from altitudes as low as 8 or 9 kilometers, below the altitude reached by some aircraft. Pilots, however, typically try to avoid thunderstorms—the environment associated with TGF production.

Tropical cyclones can give rise to some of the highest-energy light occurring naturally on Earth.

Tropical Storms Boris (right) and Christina (left) appeared together in the eastern Pacific Ocean several hundred kilometers off the Mexican coast on June 28, 2008. Neither storm posed a significant danger to coastal communities. Boris and Christina never reached hurricane strength, and after forming off the Mexican coast, both took westerly tracks away from land. Both storms lost strength over the next two days.