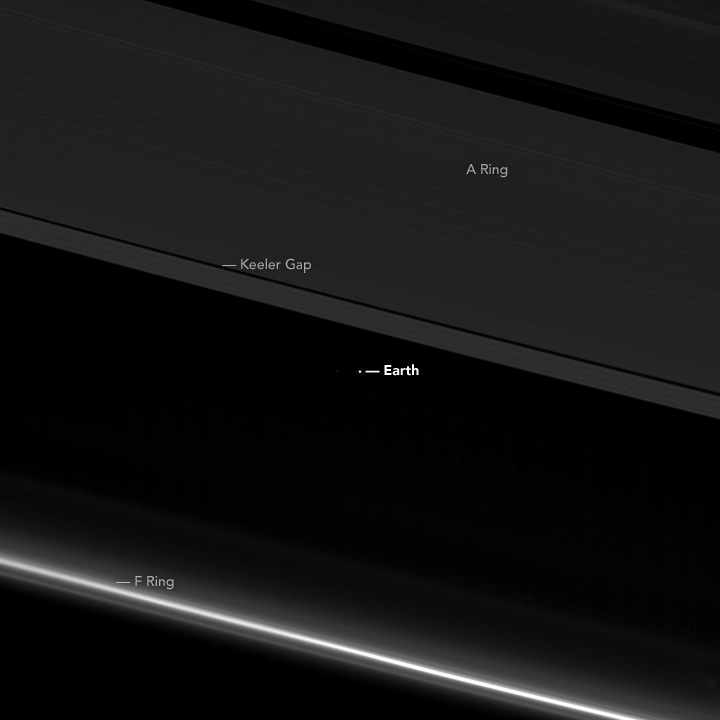 Cassini sent back this spectacular view of Earth just before it embarked on the final stage of its mission—a dramatic series of dives between Saturn and its rings that will culminate when the spacecraft plunges into the planet’s atmosphere. The image shows Earth as just a point of light between the rings. The particles in the icy rings range in size from smaller than a grain of sand to as large as mountains.

Cassini captured the image on April 13, 2017, when the spacecraft was 870 million miles (1.4 billion kilometers) from Earth. Although it is too small to be visible, the part of Earth facing Cassini was the southern Atlantic Ocean.

The A Ring and Keeler Gap are visible near the top of the image, with the F Ring below. During this observation, Cassini was looking toward the backlit rings and making a mosaic of multiple images with the Sun blocked by the disk of Saturn. The F Ring appears especially bright in this viewing geometry.

From the orbit of Saturn, Earth and the other inner solar system planets are all close to the Sun and can be captured in such images, although such opportunities have been rare during this mission. The satellite delivered similar images in 2006, when it was 1.45 billion kilometers (898 million miles) from Earth, and 2013 when it was 183 million kilometers (114 million miles) away.

All of these images are reminiscent of the pale blue dot image, which was acquired in 1990 when the Voyager spacecraft was 6.4 billion kilometers (4 billion miles) from Earth. Of that image, astronomer Carl Sagan famously said:

Look again at that dot. That’s here. That’s home. That’s us. On it everyone you love, everyone you know, everyone you ever heard of, every human being who ever was, lived out their lives. The aggregate of our joy and suffering, thousands of confident religions, ideologies, and economic doctrines, every hunter and forager, every hero and coward, every creator and destroyer of civilization, every king and peasant, every young couple in love, every mother and father, hopeful child, inventor and explorer, every teacher of morals, every corrupt politician, every “superstar,” every “supreme leader,” every saint and sinner in the history of our species lived there—on a mote of dust suspended in a sunbeam.

The Cassini-Huygens mission is a cooperative project of NASA, the European Space Agency, and the Italian Space Agency. NASA’s Jet Propulsion Laboratory manages the mission and designed, developed, and assembled the Cassini orbiter.

Image courtesy the Cassini Imaging Central Laboratory for Operations. Caption by Adam Voiland, with information from the NASA JPL Photojournal.

As the spacecraft headed into its last days, it sent back this image of Earth framed by Saturn’s rings.

A Cubic View of Earth

The MarCO-B CubeSat snapped its first photo on May 9, 2018, and caught a glance of home.