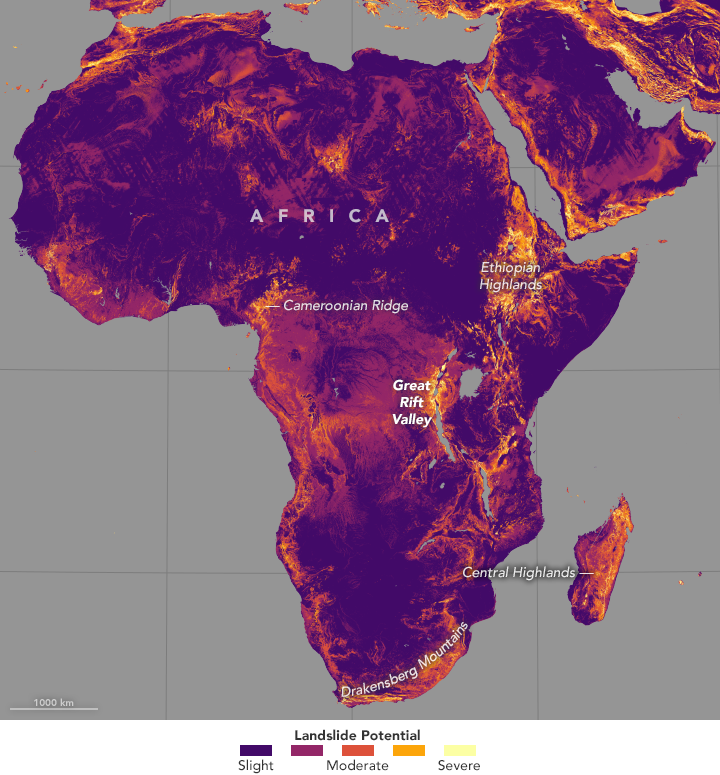 Thousands of fatal landslides happen each year, and most of them reportedly occur in Asia. India, China, and Southeast Asia sustain especially large numbers of landslide casualties and damage, according to a catalog of rainfall-triggered slides maintained by NASA scientists Dalia Kirschbaum and Thomas Stanley. Significant numbers of dangerous landslides occur in Africa and South America as well, but there is far less awareness of them.

Of 5,741 landslides included in the Global Landslide Catalog between 2007 and 2013, roughly half occurred in Asia. Sixty-seven percent of reported deaths occurred in that region. In comparison, 7 percent of deaths were in Africa, and 18 percent were in South America. However, Kirschbaum and Stanley point out that the catalog does not include all landslides that happen. Since it is based on reports from governments and aid groups, and from news articles published in English, many small landslides—and even some large, deadly ones—are left out.

The NASA team regularly compares their catalog of reports with a related product—a map of global landslide susceptibility—and they have noticed some interesting trends. Even though one-quarter of landslide reports come from North America, less than 1 percent of reported fatalities occur there. The same is true for Europe and Oceania; there are many reports but few deaths. 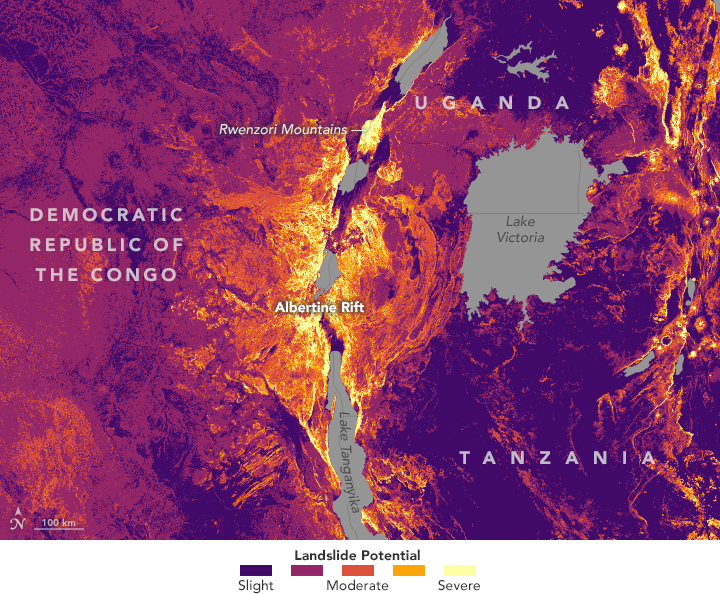 The opposite trend emerged from Africa and South America. These regions had few landslide reports but large numbers of deaths. “This disparity tells us that there is much that could be done in many areas to understand and respond to threats from landslides more effectively,” said Kirschbaum.

This is particularly true in Africa, where awareness of landslide threats is limited and reports are rare. Yet as shown by the first image, many regions—including the Ethiopian Highlands, the Cameroonian Ridge, the Great Rift Valley, the Central Highlands of Madagascar, and the Drakensberg Mountains in South Africa—have conditions that make landslides likely.

One area with unusually high susceptibility is the Albertine Rift in Central and Eastern Africa. The rift sits at the center of a zone of notably high potential for landslides because it is flanked by highlands such as the Rwenzori Mountains. Deforestation, large numbers of faults, and regular rains all contribute to landslide potential in this area.

One recent study, led by Liesbet Jacobs of Vrije Universiteit Brussel and the Royal Museum for Central Africa, made it clear that people living near the Albertine Rift face more than just nuisance landslides. By searching online and conducting field research, Jacobs and colleagues documented 48 landslides and flash floods in the Rwenzori Mountains between 1929 and 2014. They attributed 56 deaths, more than 14,000 people losing their homes, and large-scale destruction of infrastructure to landslides during that period. 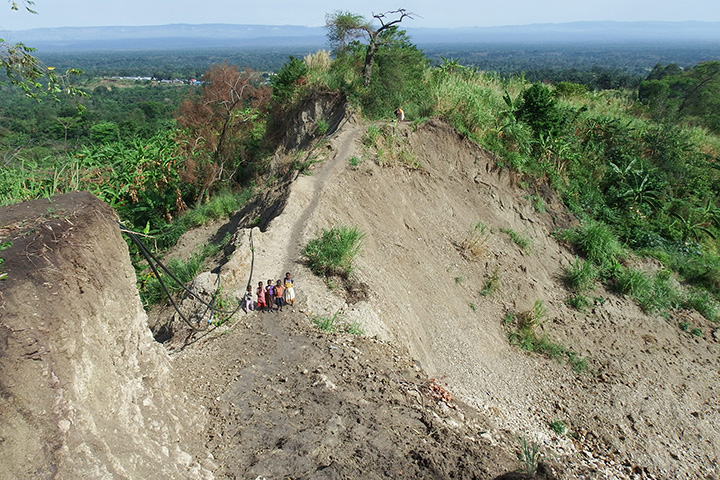 The photograph above shows children standing in the debris of a deep landslide in Bundibugyo, a district in western Uganda. While the slopes in this part of the Rwenzori are not particularly steep, they are quite susceptible to landslides because of the clay-rich soil in the area. It was taken by Jacobs on March 9, 2016.

“There is an urgent need to invest in research on disaster risk reduction strategies in this region and other similar highland areas of Africa,” Jacobs said. “You may not hear about landslides in the Rwenzori and in other remote areas, but they are happening and having a huge impact on people.”

Read more about the landslide susceptibility map and model.

In parts of Africa and South America, landslides are happening even if you rarely hear of them.

A new NASA project improves landslide inventories with data from the public.

Automating the Detection of Landslides

A Global View of Landslide Susceptibility