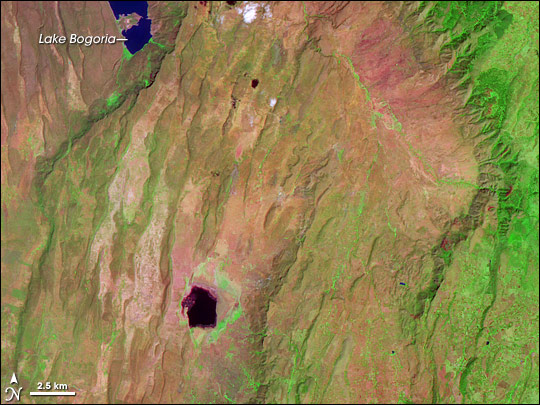 The long, linear valleys and sinuous escarpments that dominate the topography of this image of southern Rift Valley Province in Kenya are created by the cracking and sinking of long, narrow blocks of Earth’s crust as geologic forces rip the tectonic plate supporting the African continent into two pieces. Along the rift (the boundary where the pieces of the crust are diverging), lie a string of salty lakes, volcanoes, hot springs, and geysers.

This simulated natural-color image from the Advanced Spaceborne Thermal Emission and Reflection Radiometers (ASTER) on NASA’s Terra satellite on December 18, 2002, shows the area south of Lake Bogoria in Kenya. The lake is narrow and shallow, and high rates of evaporation make the water salty. Vegetation (bright green) in the area is relatively sparse, outlining moister ridges and slopes. Cultivated vegetation also occurs, recognizable especially along rivers and near lakes by geometric patterns and sharp boundaries. Bare, rocky ground appears pinkish tan. The darker blue-black spot below and left of image center is another lake. The difference in color between that lake and Lake Bogoria may be due to differences in depth, clarity, or minerals in the water.

One of the smaller lakes of the East African Rift is rich with mud, fish, and geologic beauty.