The ‘Place of Blue Smoke’ 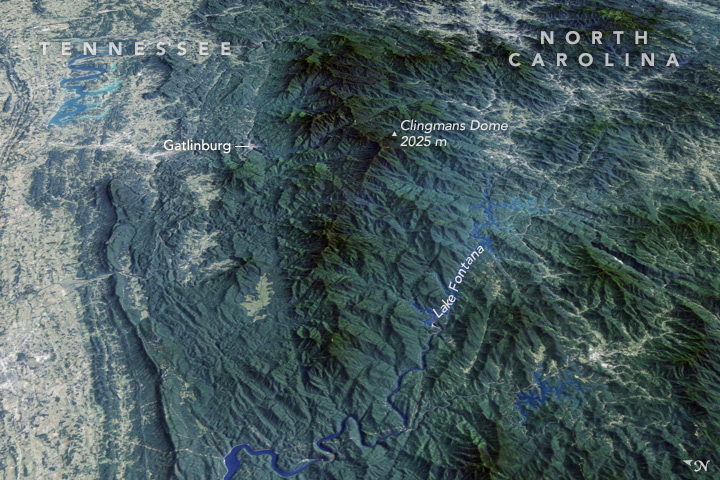 The Cherokee Indians, the original inhabitants of the area, called these dark, fog-streaked hills “Shaconage”—the “place of blue smoke.” Scientists say the Great Smoky Mountains owe that color to a natural process. Plants exhale volatile organic compounds—gases that react with other substances in the air, creating aerosols. These aerosols can cause short wavelengths of light at the blue-violet end of the spectrum to scatter, creating a bluish haze.

The area’s relatively high humidity may also play a role. According to the National Park Service, average annual rainfall varies from roughly 55 inches (140 centimeters) in the valleys to more than 85 inches (215 centimeters) on the hills, making it one of the rainier places in the United States. At high elevations, the park’s humid air turns into fog, shrouding the mountains and giving them their iconic appearance.

Despite the feral appearance of its tree-covered hills, the park has long borne the fingerprints of human settlement. The Cherokee people lived in the area for more than a thousand years. In the late 1700s, the first European pioneer families began to clear land and make homes in the Smoky Mountains. As homesteaders populated more of the lands, President Andrew Jackson signed the Indian Removal Act in 1830, forcing the Cherokee and other tribes west in a journey known as “the Trail of Tears.”

The domestication of this stretch of land goes hand-in-hand with the story of the hog. Just as cattle ranching became popular in the American West, pig farming thrived in Appalachia. The self-sufficient animals were set free in the woods, with notches cut into their ears to indicate ownership. (The practice gave us the expression “to earmark.”) These pigs were said to have interbred with European wild boars, which escaped from a game farm in the 1900s. Their descendants still roam the mountains.

An invasive species, the wild hog has few natural predators. Hogs can damage crops and kill birds, which has earned them a reputation as a pest. Because they use their tusks to dig in the ground for food, they can also kill the park’s native plant life. Biologists have long worked to suppress the area’s wild hog population.

Not long after the park’s founding in 1934, the Great Depression brought a burst of activity to the region. In the 1930s, the Civilian Conservation Corps (CCC) brought young men seeking work to build many of the still-existing park features, like the Elkmont Bridge.

Today, with more than 10 million visitors each year, the Great Smoky Mountains National Park consistently ranks among the U.S.’s top three most visited parks. Perched on the Tennessee-North Carolina border, it is just a few hours’ driving distance from several major cities—including Charlotte, Nashville, Lexington, and Atlanta. City dwellers can seek refuge in the verdant hills and tumbling waterfalls, and peer at the still-standing colonial cabins.

The image above was stitched together from several Landsat 5 and Landsat 7 scenes. It is a best-pixel mosaic, representing the most cloud-free pixels during the summertime (June 21 - September 20) from 1986 to 2013. 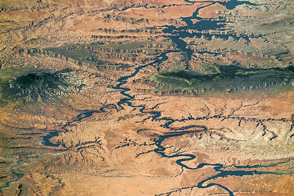