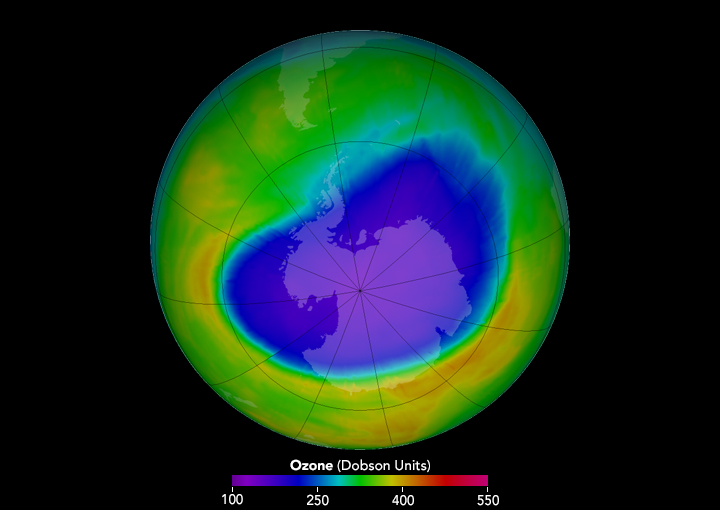 The size and depth of the ozone hole over Antarctica was not remarkable in 2016. As expected, ozone levels have stabilized, but full recovery is still decades away. What is remarkable is that the same international agreement that successfully put the ozone layer on the road to recovery is now being used to address climate change.

The stratospheric ozone layer protects life on Earth by absorbing ultraviolet light, which damages DNA in plants and animals (including humans) and leads to health issues like skin cancer. Prior to 1979, scientists had never observed ozone concentrations below 220 Dobson Units. But in the early 1980s, through a combination of ground-based and satellite measurements, scientists began to realize that Earth’s natural sunscreen was thinning dramatically over the South Pole. This large, thin spot in the ozone layer each southern spring came to be known as the ozone hole.

The first image shows the Antarctic ozone hole on October 1, 2016, as observed by the Ozone Monitoring Instrument (OMI) on NASA’s Aura satellite. On that day, the ozone layer reached its average annual minimum concentration, which measured 114 Dobson Units. For comparison, the ozone layer in 2015 reached a minimum of 101 Dobson Units. During the 1960s, long before the Antarctic ozone hole occurred, average ozone concentrations above the South Pole ranged from 260 to 320 Dobson Units.

“This year we saw an ozone hole that was just below average size,” said Paul Newman, ozone expert and chief scientist for Earth Science at NASA’s Goddard Space Flight Center. “What we’re seeing is consistent with our expectation and our understanding of ozone depletion chemistry and stratospheric weather.” 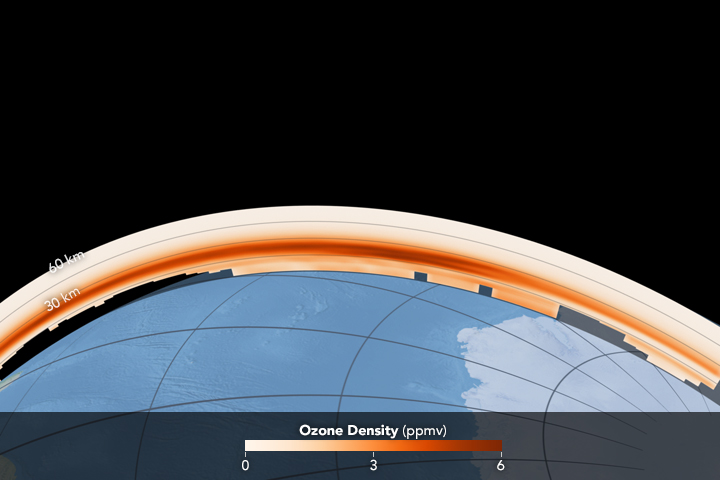 The second image presents an edge-on (limb) view of Earth’s ozone layer. These data were acquired on October 2 by the Ozone Mapping Profiler Suite (OMPS) during a single orbit of the Suomi-NPP satellite. It reveals the density of ozone at various altitudes, with dark orange areas having more ozone and light orange areas having less. Notice that the word hole isn’t literal; ozone is still present over Antarctica, but it is thinner and less dense in some areas.

In 2014, an assessment by 282 scientists from 36 countries found that the ozone layer is on track for recovery within the next few decades. Ozone-depleting chemicals such as chlorofluorocarbons (CFCs)—which were once used for refrigerants, aerosol spray cans, insulation foam, and fire suppression—were phased out years ago. The existing CFCs in the stratosphere will take many years to decay, but if nations continue to follow the guidelines of the Montreal Protocol, global ozone levels should recover to 1980 levels by 2050 and the ozone hole over Antarctica should recover by 2070.

The replacement of CFCs with hydrofluorocarbons (HFCs) during the past decade has saved the ozone layer but created a new problem for climate change. HFCs are potent greenhouse gases, and their use—particularly in refrigeration and air conditioning—has been quickly increasing around the world. The HFC problem was recently on the agenda at a United Nations meeting in Kigali, Rwanda. On October 15, 2016, a new amendment greatly expanded the Montreal Protocol by targeting HFCs, the so-called “grandchildren” of the Montreal Protocol.

“The Montreal Protocol is written so that we can control ozone-depleting substances and their replacements,” said Newman, who participated in the meeting in Kigali. “This agreement is a huge step forward because it is essentially the first real climate mitigation treaty that has bite to it. It has strict obligations for bringing down HFCs, and is forcing scientists and engineers to look for alternatives.”