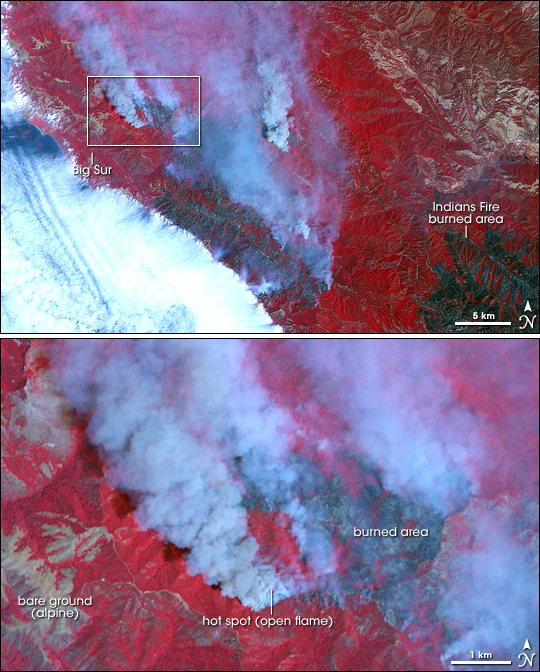 The statistics on the Basin Complex Fire provided by the National Interagency Fire Center on the morning of July 2, 2008, were sobering. In the previous 24 hours, the area affected by the fire had expanded by more than 12,000 acres to a total of 51,985 acres. (Increased acreage can be a combination of actual fire growth and more accurate mapping of areas burned on previous days.) The fire was only about 3 percent contained. The Indians Fire (81,378 acres) to the southeast was less active: no growth in the previous 24 hours and 95 percent contained.

This false-color image of the Santa Lucia Range Mountains near Big Sur, California, was captured by Advanced Spaceborne Thermal Emission and Reflection Radiometer (ASTER) on NASA’s Terra satellite on June 29, 2008. Vegetation is red, naturally bare ground is tan, burned ground is charcoal colored, and smoke is light blue. Clouds over the Pacific Ocean to the southwest are bright bluish white.

The Basin Complex Fire was clearly active on multiple fronts. Large smoke plumes come from points on the northwest, northeast, and southeast corners. The large burn scar in the lower center of the center shows that the fire ran all the way to the coast in places. South of Big Sur, portions of the state’s famously scenic coastal highway (Highway 1) had to be closed. The inset of the active northwest front shows several bright pink spots beneath the smoke. In images made with visible and infrared light, such “hotspots” are often a sign of open flame.

For wildlife officials, the Basin Complex Fire produced a small statistic that was nevertheless a large tragedy; the probable death of a single California condor chick in its nest. The California condor, the largest bird in America, nearly went extinct in the early 1980s. The fewer than two dozen condors remaining in the wild in the United States were captured and used to start a breeding program. The mountains around Big Sur are one of the release sites for the captive-reared birds; last year (2007) was the first year that the small population of Big Sur condors successfully conceived chicks—two—in the wild. In 2008, three chicks were hatched. One was located in an area nearly completely burned by the fire, while the other two are in areas that are still threatened. All of the birds in captivity were successfully evacuated from the fire area.

The Basin Complex Fire was clearly active on multiple fronts. The large burn scar in the lower center of the center shows that the fire ran all the way to the coast in places. South of Big Sur, portions of the state’s famously scenic coastal highway (Highway 1) had to be closed.

â€œDryâ€ thunderstorms triggered hundreds of fires in California on the first day of summer 2008. In Northern California, fires continued to burn in August.