Centuries ago, a vast tidewater glacier covered all of Glacier Bay. By 1750, that ice began to retreat. Over the past 260 years it has withdrawn nearly 60 miles to the head of the bay.

Thousands of glaciers—more than 50 of them named—dot Glacier Bay National Park & Preserve, which is also part of a UNESCO world heritage site. The cliff-like ice walls rise vertically from the water, while heavy chunks of ice pool in the slushy water. Humpback whales swim and puffins nest in these waters, while thick stands of alder and devil’s club grow on the hills, posing an obstacle for the more adventuresome hikers. In the springtime, wild lupins fleck the landscape with bursts of violet. Land mammals roam the park, primarily at lower elevations in the forests and along the coastline.

Where Glacier Bay National Park borders the Gulf of Alaska, the climate is mild and prone to significant rainfall. Glacier Bay itself, by contrast, lies in a cold pocket, seeing far more snow and lower temperatures year-round. Together, the national park and preserve cover 3,283,000 acres (13,286 square kilometers)—a varied landscape roughly the size of Connecticut. The park has more than 700 miles of jagged coastline.

On May 14, 2016, an astronaut aboard the International Space Station (ISS) took this photograph of Glacier Bay with a Nikon D4 camera using an 800 millimeter lens. The village of Gustavus, to the west of the bay, is among the few populated places here. The town was settled by homesteaders before the site became a national monument. 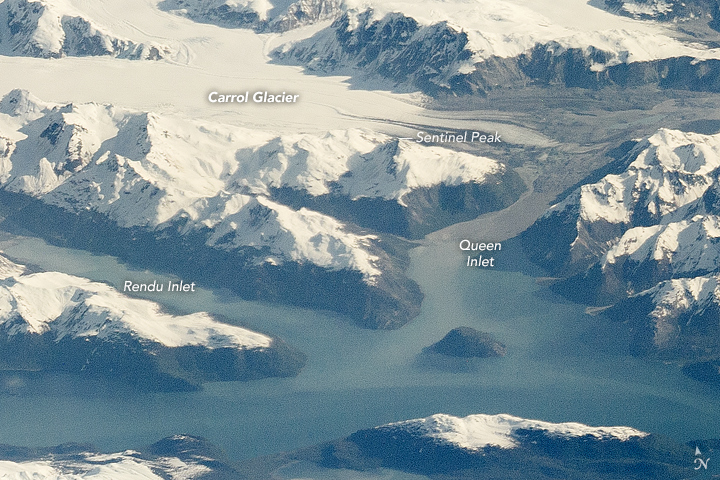 Like much of Alaska, Glacier Bay has no road access. The park’s only road is more than ten miles from Gustavus. Even so, more than 430,000 visitors—most of them on cruise ships—came to peer at the glacier in 2015. Others floated closer to the ice on whitewater rafting trips.

The park protects some of the ancestral territory of the Huna Tlingit tribes. In conjunction with the National Park Service centennial in 2016, a newly completed Huna Tlingit tribal house will open its doors. Adorned with traditional carvings and totem poles, it will be the first permanent clan house in the area since an advancing glacier destroyed Tlingit villages more than 250 years ago.

Astronaut photographs ISS047-E-119509, ISS047-E-119510, and ISS047-E-119511 were acquired on May 14, 2016, with a Nikon D4 digital camera using an 800 millimeter lens, and were provided by the ISS Crew Earth Observations Facility and the Earth Science and Remote Sensing Unit, Johnson Space Center. The images were taken by the Expedition 47 crew. It has been cropped and enhanced to improve contrast, and lens artifacts have been removed, and the images were then mosaiced together to form a composite image. The International Space Station Program supports the laboratory as part of the ISS National Lab to help astronauts take pictures of Earth that will be of the greatest value to scientists and the public, and to make those images freely available on the Internet. Additional images taken by astronauts and cosmonauts can be viewed at the NASA/JSC Gateway to Astronaut Photography of Earth. Caption by Pola Lem.

Where Glacier Bay National Park reaches the Gulf of Alaska, the climate is mild and prone to significant rainfall. Glacier Bay itself, however, tends to be snowy and cold. 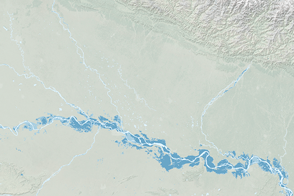 The first recorded charting of the area was done in 1794 by George Vancouver, in which he showed the bay being a small indentation in the Icy Strait with a gigantic glacier stretching off to the horizon.