Why Monitoring Emissions from Permafrost Matters 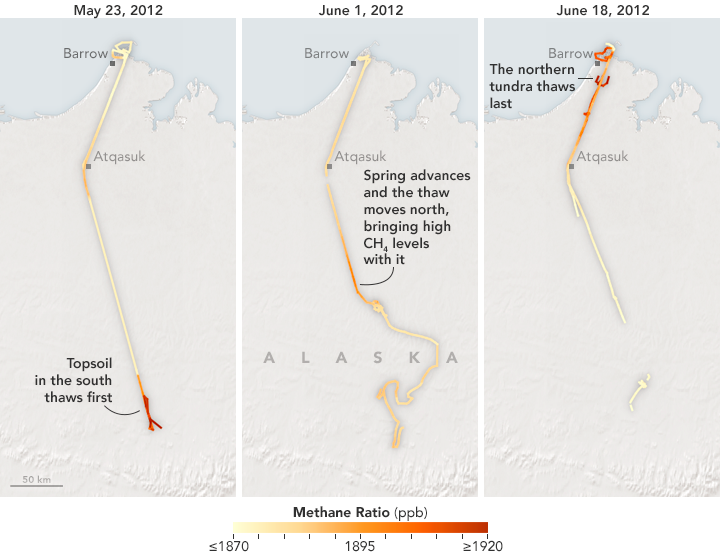 A layer of soil and rock that remains frozen year round lies underneath about one-quarter of the land surface in the Northern Hemisphere. Called permafrost, this frozen layer stores a massive amount of carbon in the form of frozen organic matter and trapped gases.

When permafrost thaws, microbial activity increases and it begins to release this stored carbon by leaking carbon dioxide (CO2) and methane (CH4) into the atmosphere. Some scientists are concerned that the ongoing thawing of Arctic permafrost due to global warming will amplify warming by releasing even more of these potent greenhouse gases into the atmosphere.

To better understand current methane emissions from permafrost—and to set a baseline for monitoring future changes—NASA scientists have conducted field research using a C-23 Sherpa aircraft outfitted with sensors that measure carbon dioxide and methane. As part of the Carbon in Arctic Reservoirs Vulnerability Experiment (CARVE), researchers flew over northern Alaska each summer for the past four years.

“We know that permafrost soils are warming even faster than Arctic air temperatures—as much as 2.7 to 4.5 degrees Fahrenheit (1.5 to 2.5 degrees Celsius) in just the past 30 years,” said Charles Miller, the principal investigator for CARVE. “What we do not understand well is the effect that is having on emissions of carbon dioxide and methane.”

The map above shows the flight tracks and observations of methane in the atmosphere collected during CARVE flights on May 23, June 1, and June 18 of 2012. As the spring thaw advances northward across Alaska’s tundra, methane is released from the topsoil. CARVE scientists observed this phenomena when bursts of high methane levels were recorded progressively northward in three separate flights. The image below shows the C-23 in flight. The C-23, based at Wallops Flight Facility, is a two-engine turboprop aircraft designed to operate efficiently under the most arduous conditions. It can carry a payload of about 7,000 pounds (3,000 kilograms). 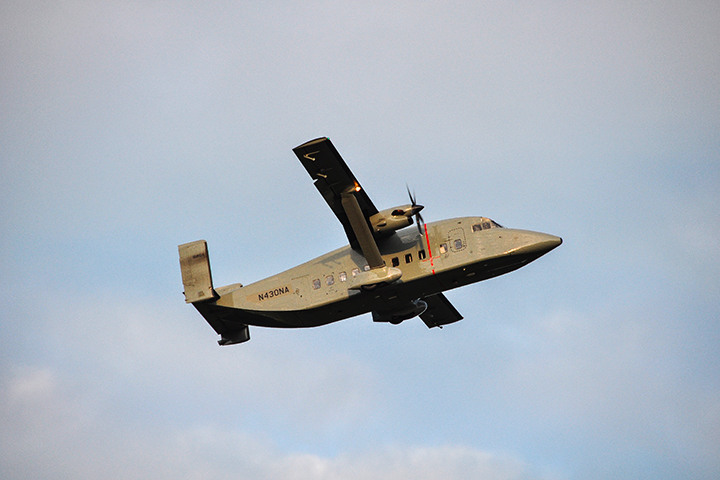 In the first year of flights (2012), the team found methane emissions to be around the expected norm for Alaska. Observations from later years turned up some surprises. For instance, while methane emissions seemed to be at normal levels, the amount of carbon dioxide venting from the permafrost was high. The CARVE team also found evidence that Arctic regions emit methane long after surface soils freeze in the winter. Because most climate models assume virtually no Arctic methane emissions in the winter, some of these models will need an update.

Although the CARVE campaign ended in 2015, the analysis of data collected by CARVE is ongoing. Meanwhile, Miller will continue the measurements through NASA’s Arctic-Boreal Vulnerability Experiment (ABOVE).

Read more about methane in our feature story Methane Matters.

Permafrost Becoming a Carbon Source Instead of a Sink

As global and regional warming continues, winter emissions of carbon dioxide from Arctic lands are offsetting what plants absorb in the summer.

Methane Emissions from the Arctic Ocean

Airborne measurements detect the greenhouse gas rising out of cracks in the ice cap.