total destruction that Cyclone Nargis brought to much of the rest of the Irrawaddy Delta in Burma (Myanmar), its southern suburbs were completely submerged on May 7, 2008."> 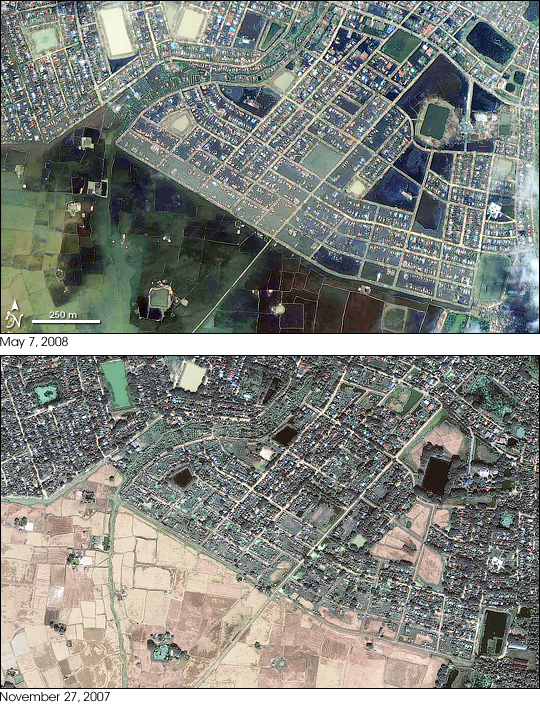 Though Yangon (Rangoon) escaped the total destruction that Cyclone Nargis brought to much of the rest of the Irrawaddy Delta in Burma (Myanmar), its southern suburbs were completely submerged on May 7, 2008, when the commercial Ikonos satellite captured this image. The lower image, captured on November 27, 2007, shows a neighborhood across the river from the city center, which is north of the top edge of the image. The neighborhood appeared to be residential, with tree-lined streets and closely situated houses. Fallow agricultural land in the lower left-hand corner appears light tan.

After the cyclone, the streets became muddy rivers. Many of the trees seem to be gone, and without their shadows, the streets seem to be wider. The multi-toned covering of water hides the texture of the surface, giving the area a smooth appearance that makes it look less built up. The fields of crops, probably rice, south of the city are also submerged. The small channels of water that run between the fields and the river have entirely disappeared under the flood.

Cyclone Nargis came ashore over Burma on May 2 and May 3, bringing powerful winds, heavy rains, and a large storm surge. Much of the country’s low-lying delta region flooded in the wake of the storm. The government reported the official death toll to be more than 22,000, with 41,000 missing, said the UN. The senior U.S. diplomat in Burma estimated that more than 100,000 people may have perished in the storm, said CNN. The worst of the destruction was in the Irrawaddy Delta, where 90-95 percent of the buildings were destroyed, reported the United Nations Office for the Coordination of Humanitarian Affairs.

Though Yangon (Rangoon) escaped the total destruction that Cyclone Nargis brought to much of the rest of the Irrawaddy Delta in Burma (Myanmar), its southern suburbs were completely submerged on May 7, 2008.

The first cyclone of the season in the northern Indian Ocean was a devastating one for Burma (Myanmar). At least 20,000 people were killed, and thousands more were missing as of May 9,2008.