Yemen Braces for Another Cyclone 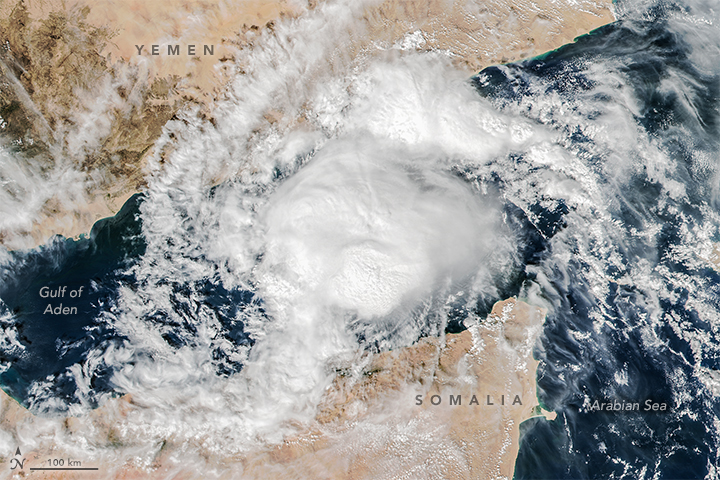 For the second time in a week, a major cyclone moved toward the Arabian Peninsula and the nation of Yemen. To have a cyclone or hurricane hit any nation twice in a week is not a common occurrence; to have two storms to hit one region of the Middle East is unprecedented. Only three cyclones have made landfall on the Peninsula across six decades of records.

Cyclone Megh has already battered Socotra, an island off the Yemeni coast in the Arabian Sea. The storm passed over the island on November 8, 2015, with estimated wind speeds approaching 125 miles per hour. U.S. Navy forecasters predict that Megh will make landfall near Aden, on the mainland of Yemen, on November 10. The winds are likely to be tropical storm force by then, though the system should drop copious amounts of rain on the desert nation. Rainfall last week led to extensive flooding in central and eastern Yemen.

The Visible Infrared Imaging Radiometer Suite (VIIRS) on the Suomi NPP satellite acquired this view of Cyclone Megh in the narrow Gulf of Aden at 2:05 p.m. local time (10:05 Universal Time) on November 9, 2015. At the time, the cyclone had sustained winds of approximately 75 knots (85 miles or 140 kilometers per hour).

According to several sources, water temperatures in the Arabian Sea and northwestern Indian Ocean were significantly above normal, approaching record highs, when Cyclone Chapala blew through the region in the first week of November 2015. One week later, the waters were somewhat cooler because Chapala had stirred up the sea surface and left a wake of upwelled water. The combination of cooler water and the dry winds from the Horn of Africa and the Arabian Peninsula should sap much of Megh’s strength, though not necessarily its precipitation.

Evan noted that the development of Chapala and Megh were likely aided by a lack of wind shear, which typically disrupts tropical storm formation. In a 2011 paper, Evan and colleagues argued that increasing air pollution—particularly a six-fold increase in aerosols—over the northern Indian Ocean has likely reduced vertical wind shear in the region, a phenomenon that could affect monsoon weather patterns and perhaps allow more cyclones to form in the region.

Cyclone Megh will bring more rain to a nation that rarely sees more than a few tens of millimeters a year. 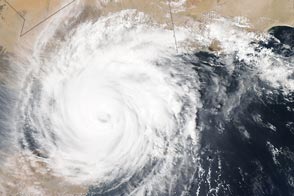 Cyclone Chapala Over the Gulf of Aden

Cyclone Chapala spins over the Gulf of Aden as a category 3 storm, and nears the coast of Yemen.

Luban is the third cyclone to develop in the Arabian Sea in 2018.