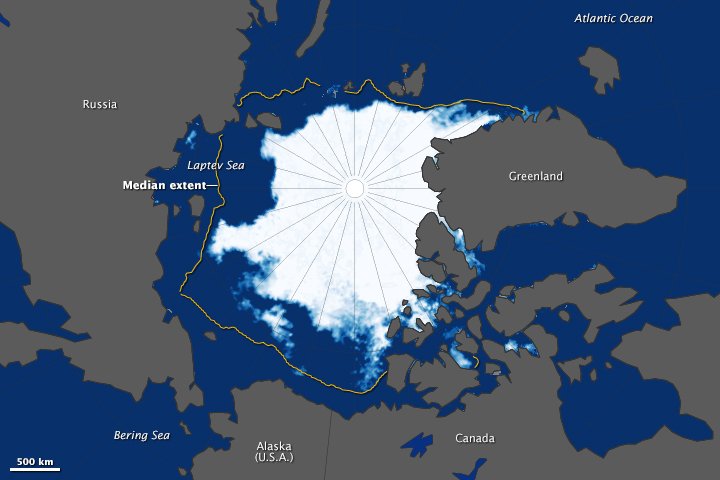 Arctic sea ice appears to have reached its annual minimum. According to a preliminary analysis of satellite data by scientists at NASA and the National Snow and Ice Data Center (NSIDC), sea ice extent shrank to 4.41 million square kilometers (1.70 million square miles) on September 11, 2015. The year will rank as the fourth lowest ice coverage since space-based observations began in 1978.

“We haven’t seen any major weather event or persistent weather pattern in the Arctic this summer that helped push the extent lower, as often happens,” said Walt Meier, a sea ice scientist with NASA’s Goddard Space Flight Center. “It was a bit warmer in some areas than last year, but it was cooler in other places, too.”

The map above shows Arctic sea ice extent on September 11, 2015. Extent is defined as the total area in which the ice concentration is at least 15 percent. The yellow outline on the map shows the median sea ice extent observed in September from 1981 through 2010. The map was compiled from observations by the Advanced Microwave Scanning Radiometer 2 (AMSR-2) sensor on the Global Change Observation Mission 1st–Water (“Shizuku”) satellite, which is operated by the Japan Aerospace Exploration Agency (JAXA).

This year’s minimum is 1.81 million square kilometers (699,000 square miles) lower than the 1981-2010 average. Sea ice cover melted at a relatively slow rate in June, the month when the Arctic receives the most solar energy. However, the rate of ice loss accelerated in July, and faster than normal loss rates continued through August, a transition month when ice losses typically begins to slow. A big “hole” appeared in the ice pack in the Beaufort and Chukchi seas in August. The huge opening allowed the ocean to absorb more solar energy, accelerating the melting process. While weather conditions in September could change the minimum extent number or date, it is unlikely that the ranking as the fourth lowest year on record will change when final numbers have been tallied.

“Arctic ice cover becomes less and less resilient and it doesn’t take as much to melt it as it used to,” Meier said. The sea ice cap, which used to be a solid sheet of ice, is now fragmented into smaller floes that are exposed to warm water on more sides. “In the past, Arctic sea ice was like a fortress. The ocean could only attack it from the sides. Now it’s like the invaders have tunneled in from underneath and the ice pack melts from within.”

The sea ice cap grows and shrinks cyclically with the seasons. Its minimum summertime extent, which occurs at the end of the melt season, has been decreasing since the late 1970s in response to warming temperatures. Since 1996, the sea ice decline has accelerated. The ten lowest minimum extents in the satellite record have occurred in the past eleven years.