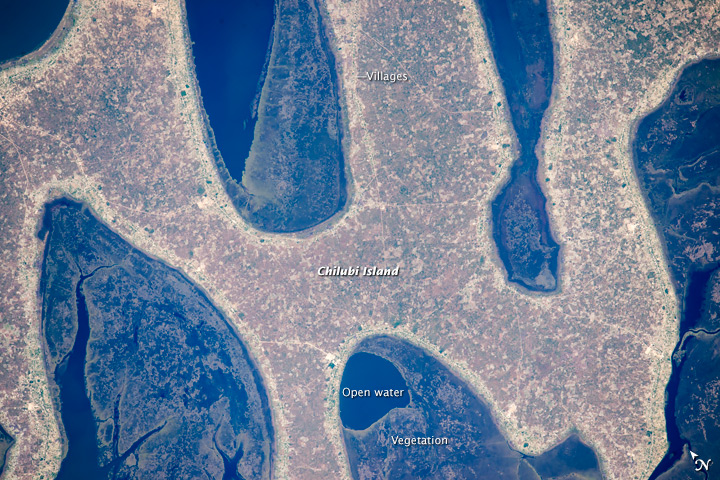 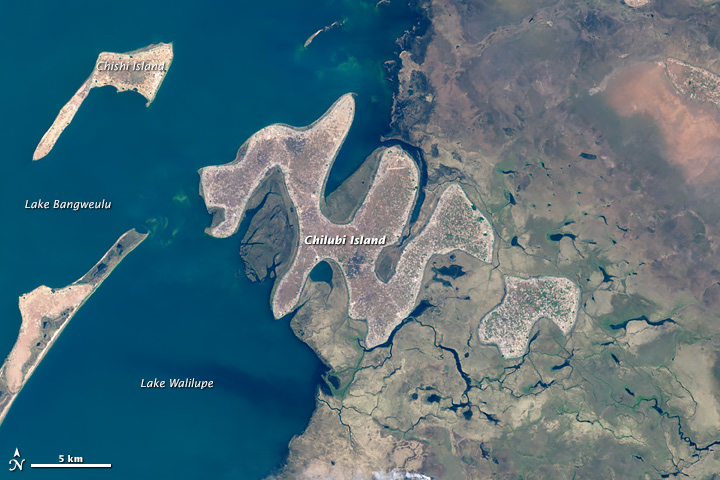 An astronaut aboard the International Space Station took this photograph of the strange rounded shapes along the coastline of Zambia’s Chilubi Island. The light-toned sand island stands out from the dark waters of Lake Bangweulu.

In the photo we see a few patches of open water between the fingers of the island. The waters are crowded by areas of aquatic vegetation and wetland (reeds, papyrus, and floating grass) in green. Lake Bangweulu, which is only 4 meters (13 feet) deep on average, is rich enough to supply fish for the copper-mining towns to the west.

Chilubi Island has 100 kilometers (60 miles) of coastline, providing prime access to the richest fishing waters in northern Zambia. Those coastlines are smoothed by easterly winds that erode ancient sand dunes. The narrow strips of lighter toned land along the shorelines are areas that have been mostly denuded of vegetation by residents of the densely populated fishing villages.

The explorer and missionary David Livingstone was the first European to visit the lake (1868).

Astronaut photograph ISS044-E-00661 was acquired on June 14, 2015, with a Nikon D4 digital camera using an 1150 millimeter lens, and is provided by the ISS Crew Earth Observations Facility and the Earth Science and Remote Sensing Unit, Johnson Space Center. The image was taken by a member of the Expedition 44 crew. The image has been cropped and enhanced to improve contrast, and lens artifacts have been removed. The International Space Station Program supports the laboratory as part of the ISS National Lab to help astronauts take pictures of Earth that will be of the greatest value to scientists and the public, and to make those images freely available on the Internet. Additional images taken by astronauts and cosmonauts can be viewed at the NASA/JSC Gateway to Astronaut Photography of Earth. Caption by M. Justin Wilkinson, Texas State University, Jacobs Contract at NASA-JSC.

The strangely shaped sand island sits in the middle of Lake Bangweulu.

An unnamed isle in Canada’s Nunavut Territory is the leading contender for this island superlative.

Fraser Island, the world’s largest sand island, is located along the coastline of Queensland, Australia, and it includes Great Sandy National Park. The island was designated a World Heritage site in 1992, in part due to its outstanding preservation of geological processes related to sand dune formation.

An archipelago in northern Lake Michigan has little in the way of human settlement. However, offshore ridges offer ideal breeding ground for trout.