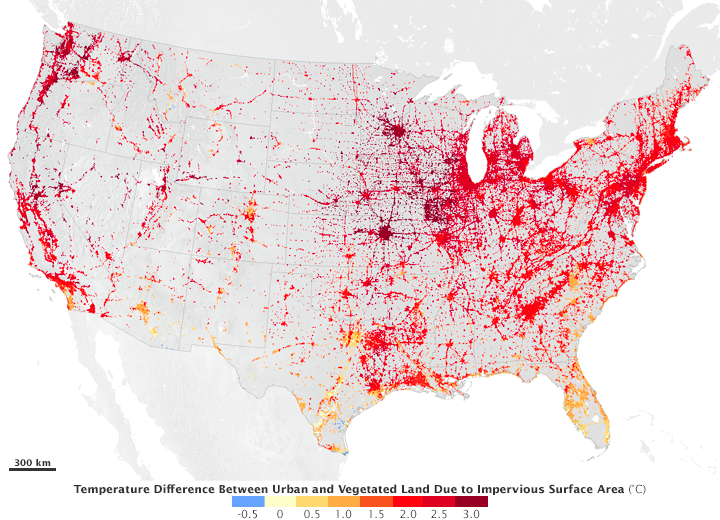 Cities are well-known hot spots—literally. The urban heat island effect has been observed to raise the temperature of cities by 1 to 3°C (2 to 5 °F) compared to neighboring rural and semi-rural areas. The rise is due to the presence of asphalt, concrete, stone, steel, and other impervious surfaces that absorb heat and disrupt the natural cooling effect provided by vegetation.

According to a new NASA study, the presence or scarcity of vegetation is an essential factor in urban heating. Using data from multiple satellites, the researchers modeled urban areas and their surroundings and found that areas covered in part by impervious surfaces—be they city centers, suburbs, or interstate highways—had an average summer temperature 1.9°C higher than surrounding rural areas. In winter, the temperature difference was 1.5 °C higher.

“This has nothing to do with greenhouse gas emissions or with anything anthropogenic. It’s in addition to the greenhouse gas effect,” said Lahouari Bounoua, a climate scientist at NASA’s Goddard Space Flight Center and lead author of the study published in Environmental Research Letters. Bounoua and colleagues also quantified how plants within urban areas—along roads, in parks, and in wooded neighborhoods—can regulate the urban heating effect.

“Everybody thinks, ‘urban heat island, things heat up,” said co-author Kurtis Thome, also from Goddard. “But it’s not as simple as that. The amount and type of vegetation plays a big role in how much the urbanization changes the temperature.”

The urban heat island effect occurs primarily during the day, when urban impervious surfaces absorb more sunlight than the surrounding vegetated areas. Trees, grasses, and other vegetation naturally cool the air as a by-product of photosynthesis. They release water back into to the atmosphere in a process called evapotranspiration, which cools the local surface temperature in much the same way that sweat cools a person’s skin as it evaporates. Trees with broad leaves, like those found in many deciduous forests on the U.S. East Coast, have more pores to exchange water than trees with needles, and so have more of a cooling effect.

Data from the Enhanced Thematic Mapper Plus (EMT+) on Landsat 7, as well NASA’s Moderate Resolution Imaging Spectroradiometer (MODIS) sensors on the Terra and Aqua satellites, were combined with NASA’s Simple Biosphere model to recreate the interaction between vegetation, urbanization, and the atmosphere at five-kilometer resolution and at half-hour time steps across the continental United States. The temperatures associated with urban heat islands range within a couple degrees, even within a city, with temperatures peaking in the central, often tree-free downtown and tapering out over tree-rich neighborhoods often found in the suburbs.

The highest urban temperatures relative to surrounding rural areas showed up along the Interstate-95 corridor from Boston to Washington, around Atlanta and I-85 corridor in the Southeast, and near the major cities and roads of the Midwest and West Coast. Smaller cities had less pronounced increases in temperature compared to the surrounding areas. In cities built in the desert, such as Phoenix, the urban area was actually cooler because irrigated lawns and trees provide cooling that dry, rocky areas do not.

Bounoua and his colleagues used the model environment to simulate what the temperature would be for a city if all the impervious surfaces were replaced with vegetation. Then they slowly reintroduced impervious surfaces into their model landscape by one percentage point at a time. What they found was unexpected. 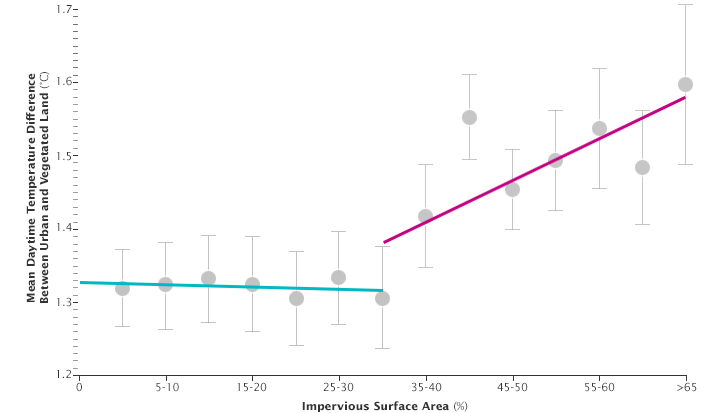 At the human level, a rise of 1°C can raise energy demands for air conditioning in the summer from 5 to 20 percent in the United States, according the Environmental Protection Agency. So even though 0.3 °C may seem like a small difference, it still may have impact on energy use, said Bounoua, especially when urban heat island effects are exacerbated by global temperature rises due to climate change.

“Understanding the tradeoffs between urban surfaces and vegetation may help city planners in the future mitigate some of the heating effects,” said Thome.

“Urbanization is a good thing,” Bounoua added. “It brings a lot of people together in a small area. Share the road, share the work, share the building. But we could probably do it a little bit better.” 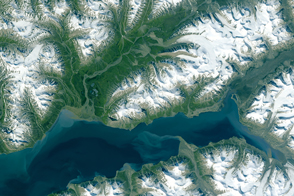