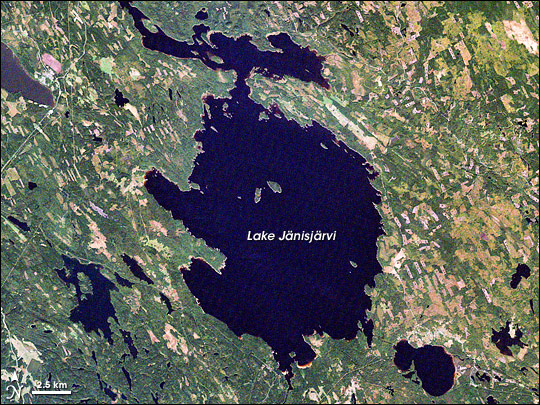 On September 5, 1999, NASA’s Landsat-7 satellite captured this image of Lake Jänisjärvi and its surroundings. This late-summer shot shows a lush green landscape free of snow and ice. Land around the lake appears in varying shades of green, interrupted by tan and pink swaths of cleared (probably agricultural) land, particularly in the east. The lake itself is deep blue, dotted with diminutive islands. A close look at the lake’s ragged contours indicates that the this water body is connected to many others in the area. The tiny tributary exiting this lake’s southern edge meanders toward Lake Ladoga to the south.

Underneath the vegetation, rocks hold clues about Lake Jänisjärvi’s past. Rocks modified by a meteor impact, known as impactites form a sheet over the area. These rocks are especially prominent in the tiny islands in the center of the lake, and along the southeast part of the shoreline. Geologists suspect that Pleistocene glaciers carried the rocks along the lake’s southeastern shore to their current location. The crater itself, however, is estimated to be much older than the Pleistocene; its age is estimated at roughly 700 million years old, making it older than the first mammals, dinosaurs, and even fish.

The light tan oval in this image is the floor of a lake in central Italy that has been drained by a tunnel dug through the surrounding hills. Numerous rectangular fields occupy the former lake bottom—now one of the most fertile regions of Italy. The area is still referred to as “Fucine Lake,” even though the lake has been dry for nearly 150 years.