Dust over the Mediterranean and Turkey 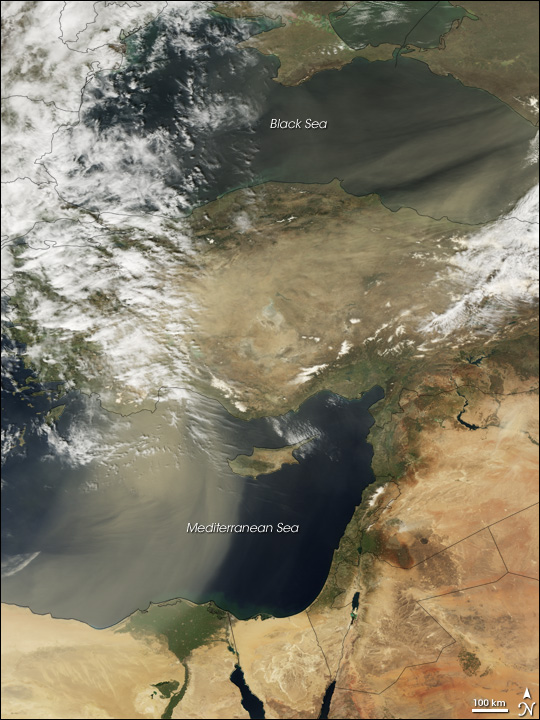 In late March 2008, dust blew northward out of the Sahara Desert and over the Mediterranean Sea. Rather than dissipating over the Mediterranean, the dust plume remained relatively coherent, passing over Turkey and turning toward the northeast, blowing over the Black Sea. The Moderate Resolution Imaging Spectroradiometer (MODIS) on NASA’s Terra satellite took this picture of the area on March 24, 2008. Aside from a bank of clouds over Turkey, the satellite image offers a clear view of the dust plume’s journey into Eurasia.

In this image, the dust appears as a translucent tan swath. Although discernible in the south, the dust is thin enough to offer a clear view of the underlying land surface, including the lush green Nile Delta, which is dotted with light-colored clearings where cities are located. The dust appears thickest off the southern coast of Turkey, perhaps influenced by the clouds in that region. Although thinner in the north, the dust plume remains recognizable as it blows over the southeastern corner of the Black Sea.

Sand covers about a quarter of the 4,800-kilometer- (3,000-mile-) wide Sahara Desert. Besides providing material to be blown around by dust storms, the Sahara Desert provides the right conditions to start such storms. As daytime temperatures rise, air near the ground becomes unstable, enabling even light winds to stir dust and raise particles hundreds or even thousands of meters into the air. Dust storms from the Sahara are a source of minerals to the Mediterranean and Black Seas; these minerals can spur blooms of plant-like marine organisms known as phytoplankton. Phytoplankton blooms can both benefit and harm marine ecosystems. On the one hand, they are the base of the food web, but overgrowth and decay of phytoplankton and algae can create dead zones—pockets of water where all the dissolved oxygen has been used up.

Dust Plume over the Eastern Mediterranean

Image of the Day Atmosphere Water Dust and Haze