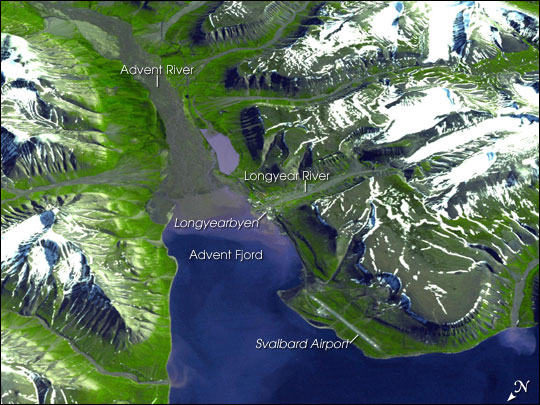 Spitsbergen, the largest of the islands in the Svalbard Archipelago, sits well inside the Arctic Circle, just south of 80 degrees north latitude. This image of the island and its topography was captured by the Advanced Spaceborne Thermal Emission and Reflection Radiometer (ASTER) on NASA’s Terra satellite on July 12, 2003. The image is oriented with north toward the lower left. The view is similar to what you might see if you were in a hot air balloon northwest of the island, looking toward the southeast.

The rugged mountains are capped with snow and glaciers, with only the river valleys and low elevations supporting vegetation. Braided, shallow rivers filled with glacial sediment occupy the valleys. The vertical scale is exaggerated by a factor of two to emphasize the rugged terrain. Spitsbergen is home to Longyearbyen, a small town at the mouth of the Longyear River, which was established by mining entrepreneur John Longyear in 1906. A small airport provides the most northerly public airline service on Earth.

Although coal mining is still an important economic activity on the frigid island, scientists have recently become as interested in what can be tucked away in the frozen mountains of Spitsbergen as what can be extracted from them. In late February 2008, Norway accepted the first deposit for a so-called “Doomsday” agricultural seed vault, drilled deep into the mountains overlooking the Svalbard Airport. Financed by Norway, the Svalbard Global Seed Vault will safeguard seeds of human food crops from all over the world in case of natural or human-caused catastrophic events that could threaten the human food supply. Seeds can remain viable for decades (often hundreds of years) when stored at temperatures below freezing (-10 to -20 degrees Celsius). Periodically, caretakers remove a few seeds from the seed vault and plant them. Seeds from these plants are then returned to the seed vault to maintain the sample.

Like many polar locations, Svalbard is showing signs of warming. Scientists have documented an increase in the rate of sediment being deposited in Advent Fjord from the glacier-fed Longyear and Advent Rivers. The glaciers feeding the rivers are melting and carrying more sediment-laden water into the fjord. Nevertheless, Svalbard has the ideal climate and geology for long-term, underground seed storage. Deep inside the mountain, the ground is permanently frozen, and the sandstone rock formations are stable and don’t emit much natural radioactivity. According to the project website, “The Seed Vault will be located at such an altitude and so deep into the mountains that neither the potential rise in sea level nor the melting of the permafrost [due to global warming] is considered as a potential threat in the foreseeable future.”

Spitsbergen, the largest of the islands in the Svalbard Archipelago, sits well inside the Arctic Circle, just south of 80 degrees north latitude. This image of the island and its topography was captured by the ASTER instrument on NASA’s Terra satellite on July 12, 2003.

Gullies in the highlands called lavakas are a major source of sediment.

Bylot Island in Winter and Summer

Kettle Lakes of the Turtle Mountains