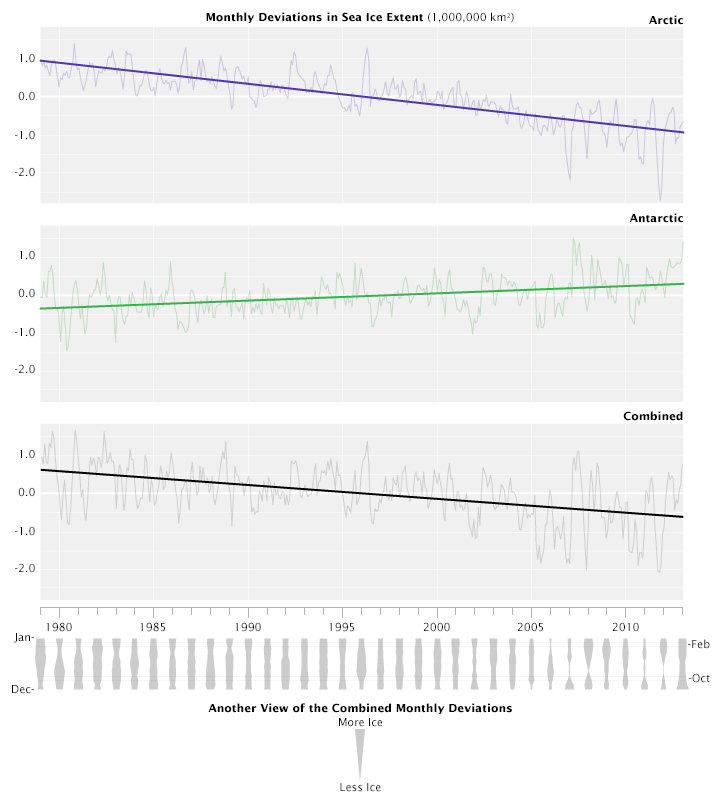 Claire Parkinson has been studying polar sea ice for about four decades. She has been speaking to public audiences for nearly as long. And it was those public audiences who provoked one of the NASA climatologist’s latest research projects.

“When I give public lectures or talk with people interested in the topic of polar ice, somebody will often say something like: ‘Well, the sea ice is decreasing in the Arctic but it’s increasing in the Antarctic, so don’t they cancel out?’” said Parkinson. “The answer is no, they don’t cancel out.”

In the past decade, sea ice around the Arctic Ocean has reached record lows several times, while the extent of ice around Antarctica has reached new highs. This has led to public misconceptions about climate change and the ice around Earth’s poles. Parkinson’s instincts and scientific experience told her that growth in one place does not necessarily offset losses in the other. But instincts are not enough. She dug into the data.

Examining 35 years of sea ice data, Parkinson has shown that increases around Antarctica do not make up for the accelerated Arctic sea ice loss of the last decades. Earth has been shedding sea ice at an average annual rate of 35,000 square kilometers (13,500 square miles) since 1979—the equivalent of losing an area of sea ice larger than the state of Maryland every year.

The line graphs above plot the monthly deviations and overall trends in polar sea ice from 1979 to 2013 as measured by satellites. The top line shows the Arctic, the middle shows Antarctica, and the third line shows the global, combined total. The sparklines at the bottom of the graphs show each year separately, enabling month-to-month comparisons across each year. The thickness of each sparkline indicates the overall growth or loss in sea ice globally. The thinning of the sparklines is indicative of the downward trend in total polar sea ice.

Parkinson analyzed microwave data that were collected by NASA and U.S. Department of Defense satellites from November 1978 to December 2013. She determined the global ice extent for each month (shown above) and found that the global trend was down in all months of the year—even those corresponding to the Arctic and Antarctic sea ice maxima. The findings were published in December 2014 in the Journal of Climate. 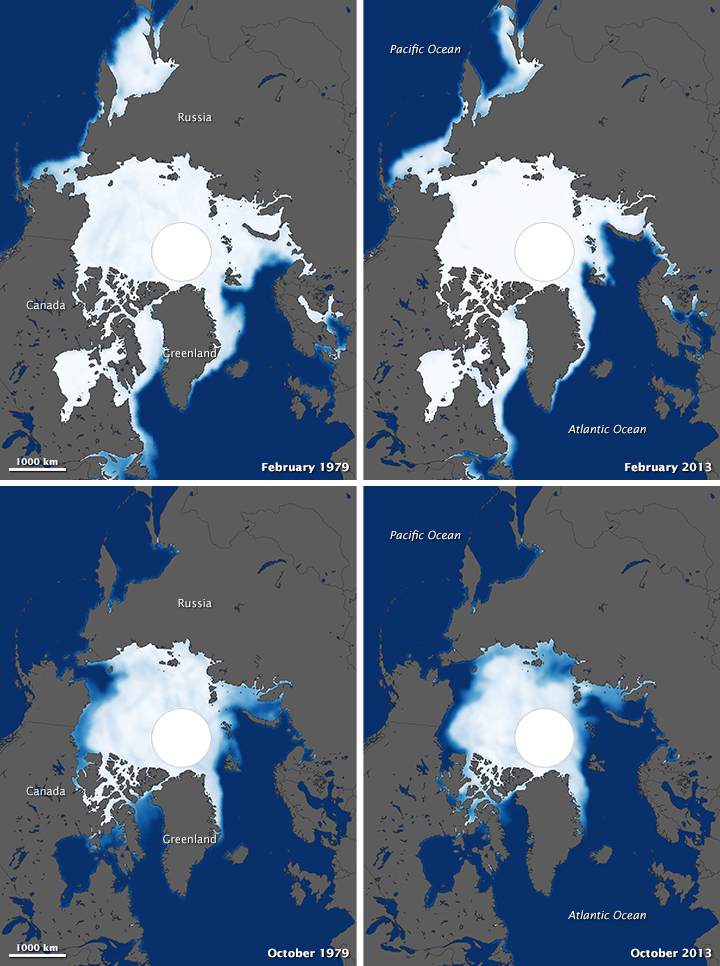 Sea ice has diminished in almost all regions of the Arctic, whereas the sea ice increases in the Antarctic are less widespread geographically. Although sea ice cover expanded in most of the Southern Ocean between 1979 and 2013, it decreased substantially in the Bellingshausen and Amundsen seas. These two seas are close to the Antarctic Peninsula, a region that has warmed significantly in recent decades.

“One of the reasons people care about sea ice decreases is because sea ice is highly reflective, whereas the liquid ocean is very absorptive,” Parkinson said. When sea ice coverage is reduced, less sunlight is reflected back into space and more is trapped in the atmosphere, ocean, and land. 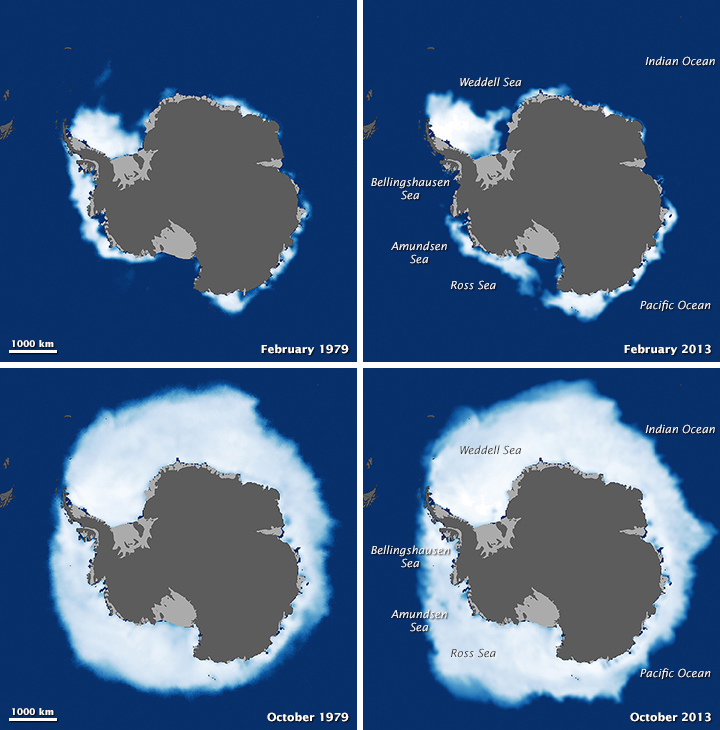 Due to accelerated Arctic losses, Earth has been shedding sea ice since 1979 at an annual rate of 35,000 square kilometers (13,500 square miles). 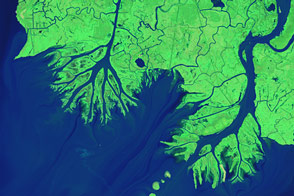 In 2017, the Arctic maximum and Antarctic minimum extents of sea ice plunged to record lows.

This map shows sea ice extent around Antarctica on September 22, 2013, when ice covered more of the Southern Ocean than at any other time in the satellite record.