The Many Colors of Electric Lights 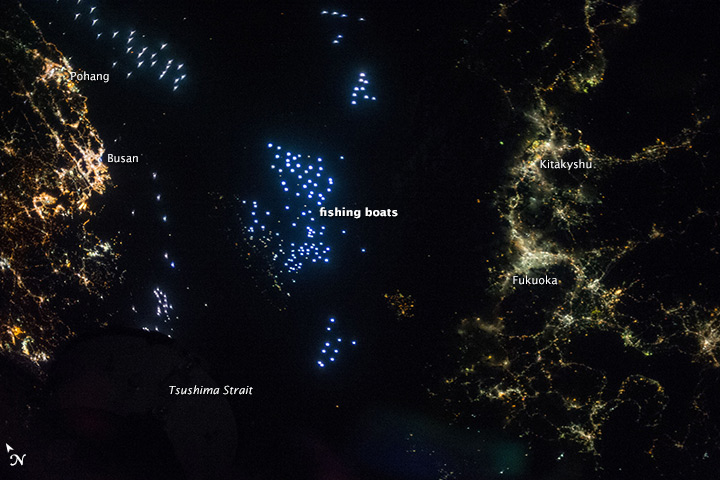 As anyone who has stood in a hardware store knows, light bulbs come in a wide range of types and colors. Incandescent bulbs have a warm glow similar to sunlight, while more energy efficient gas-discharge bulbs come in a variety of shades.

Some of the differences in artificial lighting are visible in photographs taken by astronauts aboard the International Space Station. For instance, several distinct colors of electric light are visible in this image of the Tsushima Strait, the shallow body of water that separates southern Japan and South Korea. A member of the Expedition 37 crew took this photograph on October 11, 2013.

A cluster of fishing boats is the source of the bluish light near the center of the image. The fisherman are likely luring Todarodes pacificus—a species known as the Japanese flying squid—to the surface with bright xenon bulbs. The city lights on the Korean side of the strait tend to have an orange glow, while those on the Japanese side are greener. The difference is related to the distribution of mercury vapor, metal halide, and high-pressure sodium lamps—the bulb types most often used for street and outdoor lightning. Mercury vapor lights tend to be green, high-pressure sodium is orange, and metal-halide lamps are bright white.

Astronaut photograph ISS037-E-12066 was acquired on October 11, 2013, with a Nikon D3S digital camera using a 50 millimeter lens, and is provided by the ISS Crew Earth Observations Facility and the Earth Science and Remote Sensing Unit, Johnson Space Center. The image was taken by the Expedition 37 crew. It has been cropped and enhanced to improve contrast, and lens artifacts have been removed. The International Space Station Program supports the laboratory as part of the ISS National Lab to help astronauts take pictures of Earth that will be of the greatest value to scientists and the public, and to make those images freely available on the Internet. Additional images taken by astronauts and cosmonauts can be viewed at the NASA/JSC Gateway to Astronaut Photography of Earth. Caption by Adam Voiland.

Distinct colors mark the communities and commerce along the Tsushima Strait, between Japan and South Korea.

Night Lights of the Levant

Alternating clusters of light and darkness show where civilization has carved out a place alongside and amidst the deserts.