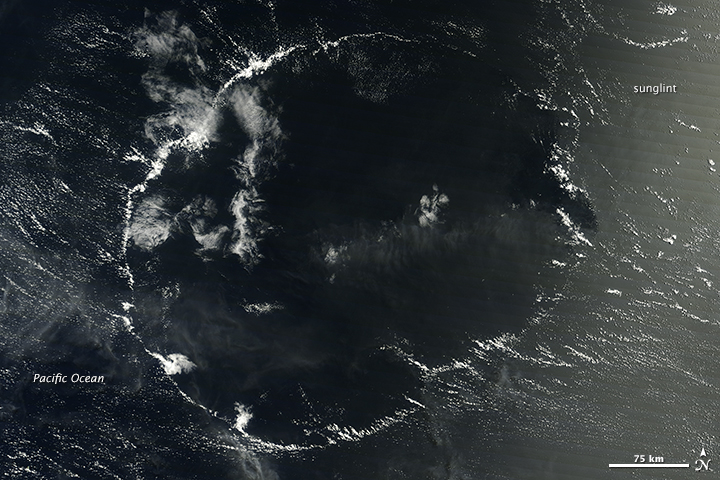 If you have ever looked carefully at clouds, you know how easily their irregular forms can remind people of all sorts of common shapes—ranging from elephants to angels. But not all clouds have irregular shapes. As this satellite image shows, they can come in near perfect circles as well.

How would such a symmetrical cloud form? Knowing a bit about how meteorologists categorize clouds is useful for understanding this. Meteorologists break convective clouds into two main groups: closed-celled and open-celled. Both types get their general shape from Rayleigh-Bernard cells, the hexagonal patterns that form naturally when fluids are heated from below.

A deck of closed-cell clouds looks similar to capped honeycomb from above, with opaque cumulus clouds at the center of the cells. Open-celled clouds have the opposite look. Rather than being at the center of a cell, lines of clouds trace the cell borders, leaving the centers cloud-free.

On September 3, 2014, the Moderate Resolution Imaging Spectroradiometer (MODIS) on NASA’s Terra satellite captured this example of what appears to be either the start or the remnants of an open-celled cloud formation. In an area a few thousand kilometers southwest of the Hawaiian Islands, Terra observed the cloud ring on a clear day over the open ocean. The center of the cloud ring was at 168.37 degrees West and 1.37 degrees South, putting it just south of a band of rain showers associated with the Intertropical Convergence Zone.

While circular clouds like this can form in several situations, this particular cloud formation likely began when the sun heated a parcel of air that happened to be over a small island or patch of warm ocean water. As the warm air became buoyant and rose, cumulus clouds and eventually patches of light rain probably developed. The rain would have cooled the air beneath the clouds, causing a downdraft that sent rain-cooled air outward from the original location of the clouds. When the rain-cooled air encountered warmer air at the edge of the cell, it likely pushed the warm air up, which caused the ring of cumulus clouds to form.

While quite common, cellular cloud patterns were unknown to meteorologists until the launch of the first weather satellites. The closely-packed mesh of clouds were too large to be recognized by fragmented networks of ground-based instruments and even airplanes, retired Penn State meteorologist Lee Grenci explained on his Weather Underground blog. The first-published example of open-cell convection occurred in February 1961, after the launch of the TIROS-1 satellite. 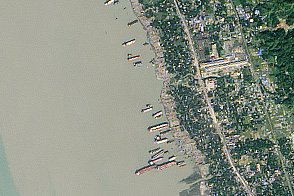 Data collected by a sensor on the Aqua satellite reveals the global distribution of clouds.