Ramsar Convention and Wetlands in Vietnam 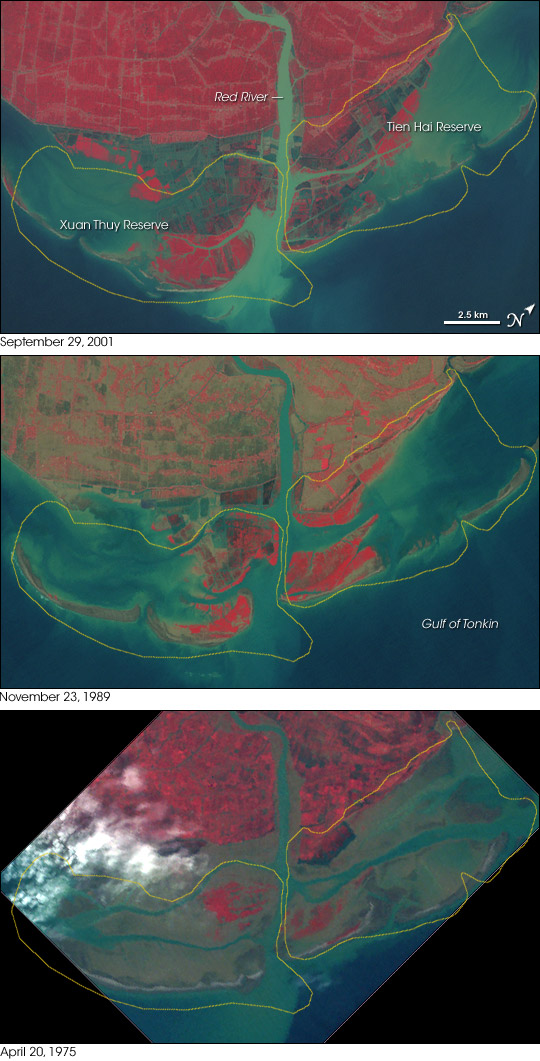 Composed of salt-loving trees, bushes, and shrubs, mangrove forests play critical roles in providing waterfowl habitat and preventing coastal erosion. Because the areas they occupy are also viable for aquaculture, however, these watery forests face continual pressure from development. One strategy to protect mangrove wetlands is the Ramsar Convention on Wetlands, an international treaty aimed at “wise use” of wetland resources. In 1989, Vietnam signed on to the Ramsar Convention, designing the Xuan Thuy Wetland Reserve as a Ramsar site. A study published in 2007 used satellite data to document the impact of the Ramsar designation on the area’s mangroves.

The Xuan Thuy Wetland Reserve sits along the coast of northern Vietnam, at the mouth of the Red River. It is adjacent to the Tien Hai Nature Reserve, which is not a Ramsar site. Both reserves occupy one of Vietnam’s two major agricultural regions. The sites’s proximity to each other and differing Ramsar status made them ideal reserves to compare over time. These images, acquired by NASA’s Landsat satellites, show the region in April 1975, November 1989, and September 2001. In these false-color images, red indicates vegetation, and brown indicates relatively bare ground. Blue-green indicates shallow and/or sediment-laden water, and deep blue indicates deeper, clearer water. Both nature reserves are outlined in yellow. The 1975 image is a partial shot of the area; the black areas indicate where Landsat did not collect data.

Natural and human forces continually reshape the land in this area. Probably the most obvious change over time is the steady disappearance of the barrier islands off the coast. Land almost completely fills both park perimeters in the 1975 image. In later images, the park perimeters are filled mostly by water. This land loss results from the increase of aquaculture; soil is used to create dikes or fish ponds. This conversion of wetland to aquaculture is evident in both the Ramsar and the non-Ramsar site.

Island loss is not, however, the only change. The barrier islands seem to support less vegetation in 1975 than they do in later images. The more abundant vegetation in later images results partly from seasonality (spring versus fall) and partly from replanting efforts. So although wetland area was lost to aquaculture, robust vegetation was re-established on some of the land areas that survived. (The absence of lush vegetation inland from the barrier islands in the 1989 image is because the image was acquired during the dry season, shortly after fields had been tilled.)

The 2007 study assessed the effectiveness of the Ramsar Convention by examining total mangrove extent, fragmentation, and density, as well as aquaculture extent. Although mangrove extent remained fairly constant since Vietnam became a signatory to Ramsar, mangrove fragmentation increased, suggesting disruption to the natural habitat. In addition, newly planted trees had low survival rates.

The researchers found that, over the period under study, the Ramsar site actually experienced a faster aquaculture conversion rate than the non-Ramsar site. The researchers concluded that, by emphasizing “wise use” without a specific definition of what that entailed, and without clear protection measures or repercussions for failure to protect mangroves, the Ramsar Convention had limited impact at the site.

You can download a 28.5-meter-resolution KMZ file showing change in the Red River delta from 1975 through 2001 suitable for use with Google Earth.

Mapping the Roots of Mangrove Loss

While the rate of losses has declined, the ecosystems are still threatened and are facing more environmental stress.