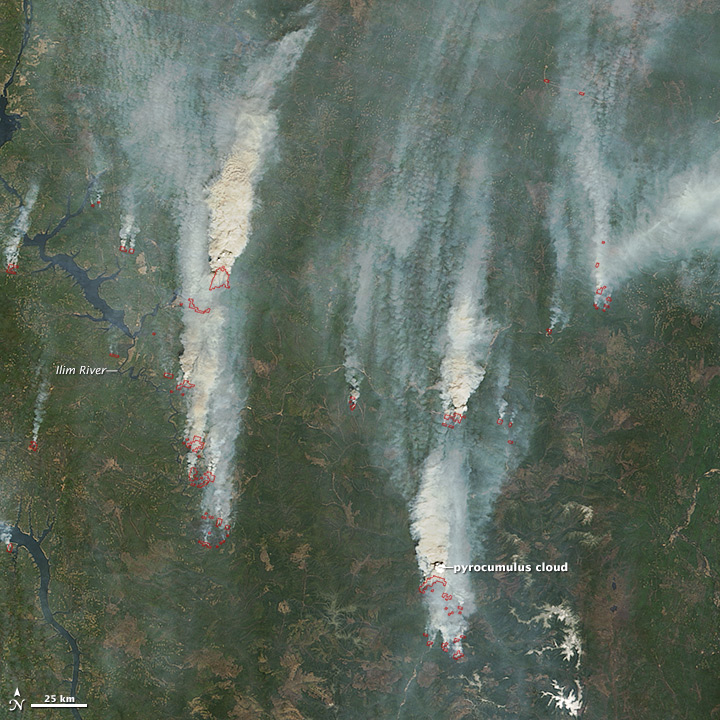 With dozens of forest fires burning in Russia’s Irkutsk region, authorities have declared a state of emergency.

Some of the blazes likely began on farms but then spread into forests due to high winds and warm temperatures. MODIS began to detect small fires in Irkutsk on May 14. Many were along rivers near farmland. After burning at a moderate level for a few days, the size and intensity of the fires increased significantly on May 18.

The St. Petersburg Times reported that 77 fires had burned more than 39,000 hectares (150 square miles) in Irkutsk by May 19. Fire destroyed 22 homes in the village of Dalny and forced the evacuation of hundreds of people, according to the Russian Emergencies Ministry (EMERCOM).

In addition to producing thick plumes of smoke, the fires fueled numerous pyrocumulus clouds—tall, cauliflower-shaped clouds that billowed up above the smoke. Pyrocumulus are similar to cumulus clouds, but the heat that forces the air to rise—which leads to cooling and condensation of water vapor—comes from fire instead of sun-warmed ground. In satellite images, pyrocumulus clouds appear as opaque white patches hovering over darker smoke.

The Irkutsk fires triggered the first confirmed pyrocumulus clouds of the 2014 fire season in the northern hemisphere, according U.S. Naval Research Laboratory meteorologist Mike Fromm. Meteorologists monitor pyrocumulus because the clouds can pump smoke and pollutants high into the atmosphere, get dispersed by winds, and affect air quality over a broad area. On May 19, MODIS observed smoke from Irkutsk wildfires mixing with clouds and moving northeast. A preliminary analysis of data acquired by the Multi-Angle Imaging SpectroRadiometer (MISR) on NASA’s Terra satellite suggested the smoke had reached between 11 and 12 kilometers and was moving about 140 kilometers (87 miles) per hour.

Fires in Russia in May 2014 fueled pyrocumulus clouds that pumped smoke high into the atmosphere.

Though fires across Russia appeared to be less intense than previously, these photo-like images show thick smoke rising from two regions in western Russia on August 15, 2010.

Authorities have declared a state of emergency in several Russian districts.