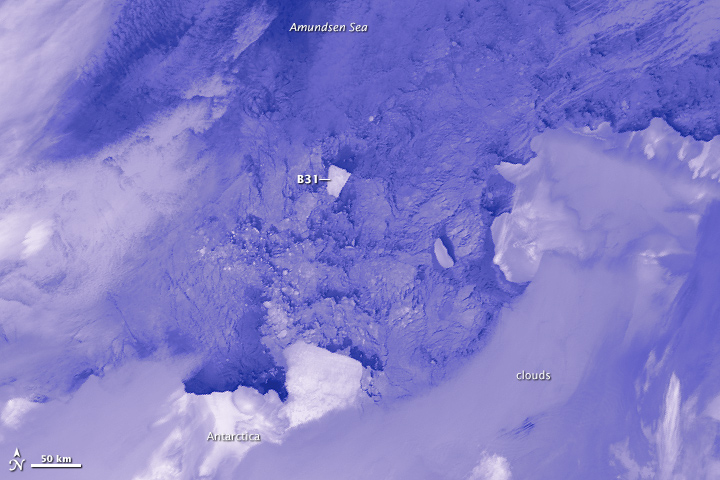 In November 2013, a large iceberg separated from the front of Pine Island Glacier. It then began a journey across Pine Island Bay, a basin of the Amundsen Sea. By mid-April, ice island B31 was headed for the swift currents of the Southern Ocean, but it became hard to track in visible light because Antarctica had fallen into winter darkness.

Pine Island Glacier has been the subject of intense study in the past two decades because it has been thinning and draining rapidly and may be one of the largest contributors to sea level rise. But ice islands and icebergs are not only tracked for scientific purposes; maritime agencies follow them because of the danger they can pose to ships.

Thermal infrared imagery spots the cracks and a new ice island through the dark of the Antarctic winter night.

Birth of an Iceberg

In a routine survey of Antarctica’s Pine Island Glacier, NASA scientists discovered a large crack in the ice which will soon lead to the birth of a new giant iceberg.

Calving that used to happen about every six years has become a near-annual event.