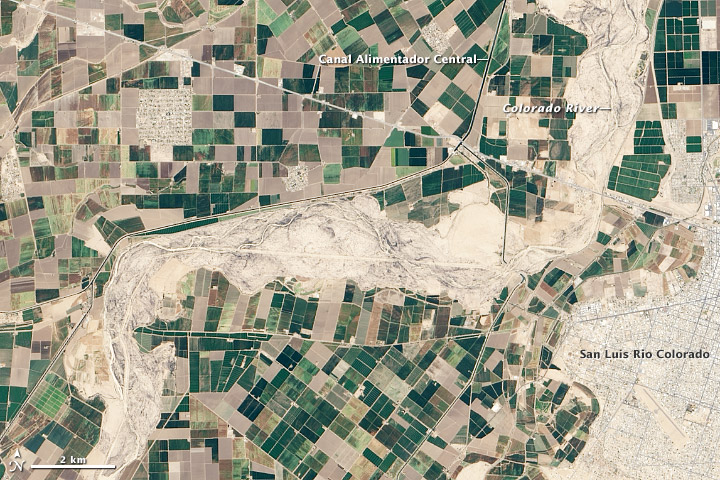 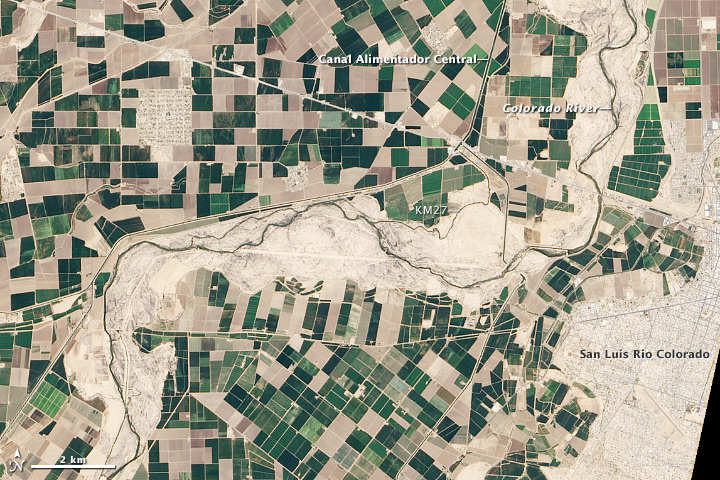 In spring 2014, residents of Mexico’s San Luis Rio Colorado got a rare glimpse of a river as it used to be. For a few months at least, the parched bottom of the Colorado River has more than its usual trickle of water. A newly revived river has enough water to kayak on and to splash and wade in. You can even see it from space.

Prior to 2014, the lower reaches of the Colorado had virtually disappeared due to demand for water from the United States and Mexico. Normally, all of the river’s flow gets diverted at the Morelos Dam into a network of channels used to irrigate farms in northern Mexico. This year, the surge of water came as a result of Minute 319, an agreement between Mexican and U.S. water and land-management agencies to recharge groundwater and restore habitats along the river.

Beginning on March 23, 2014, a “pulse flow” began with the release of 130 million cubic meters (105,000 acre-feet) of water into the Colorado’s natural channel over an eight week period. Though it sounds like a significant amount of water, it is only 1 percent of what used to flow naturally during spring floods.

The Operational Land Imager (OLI) on Landsat 8 captured this view of the Colorado near San Luis Rio Colorado on April 16, 2014. The river flows south, making a sharp turn to the west near the city. The water appears as a thin dark line winding through the tan background of the dry floodplain. The patchwork of dark green squares surrounding the river are farm fields.

For comparison, the lower image shows the same area on April 29, 2013, a year before the pulse flow. While willows and cottonwood forests used to thrive along the Colorado’s banks, little vegetation survives now due to the lack of water. In both images, you can see an irrigation channel that runs beneath the river channel. The channel siphons water from the irrigation canals north of the river and moves it to fields to the south.

The 2014 image also shows water making its way through the Kilometer 27 Spillway (KM27), a channel normally used to regulate water levels in the main irrigation channel. Water managers intentionally sent a sizable amount of pulse-flow water through KM27 because the adjacent section of the Colorado River is particularly dry and absorptive, and they want to make sure water reaches downstream restoration zones.

Before the pulse flow began, there was some hope among scientists and environmental groups that there would be enough water for the Colorado River to reconnect with the Sea of Cortez in the Gulf of California. Those hopes have dimmed as the flow has progressed slowly in sandy areas and in areas with salt cedar and other shrubs in the channel. The shrubs have acted like miniature dams, significantly slowing the pulse’s advance downstream.

“I wasn’t encouraged when I saw the flow at the last crossing,” Karl Flessa, one of the lead scientists monitoring the flow, told the High Country News. “The river’s mouth is blocked by a low sand bar that causes the river’s flow to pond up before the Gulf. Connecting that ponded-up water with the Gulf may depend as much on the effect of the tide as the level of the water.”

Regardless of whether the flow makes it to the sea, Flessa and other scientists say the experiment has already achieved its main objective: delivering water to special restoration zones along the river course. Conservation groups have been working to revive ecosystems in these areas by planting young trees, removing invasive plants, and seeding wetland areas. The groups expect to see tens of thousands of new trees growing in these areas because of the infusion of water.

“We have already observed a biological response to the flow: dragonflies, long-dormant micro-crustaceans, emerging from their resting stages; big fish in the river, more waterbirds, and beavers,” noted Eloise Kendy, the director of the environmental flows program at the Nature Conservancy.

You can read more about Laguna Grande Restoration Area and see satellite imagery of pulse flow water reaching it on our Earth Matters blog.

A one-time pulse of water is bringing a burst of new life to the lower Colorado River.

Restoring a Pulse to the Lower Colorado

With nearly all of the Colorado River’s water diverted for human uses, its delta has withered. A plan to release some water from dams and reservoirs this spring offers hope for a greener future.

A Pulse of New Life on the Colorado River

The release of a burst of extra water on the lower Colorado River allowed vegetation on the banks to revive and sprout new growth.

With so much of its water diverted, the Colorado River Delta has dried out and lost much of its vegetation and wildlife.