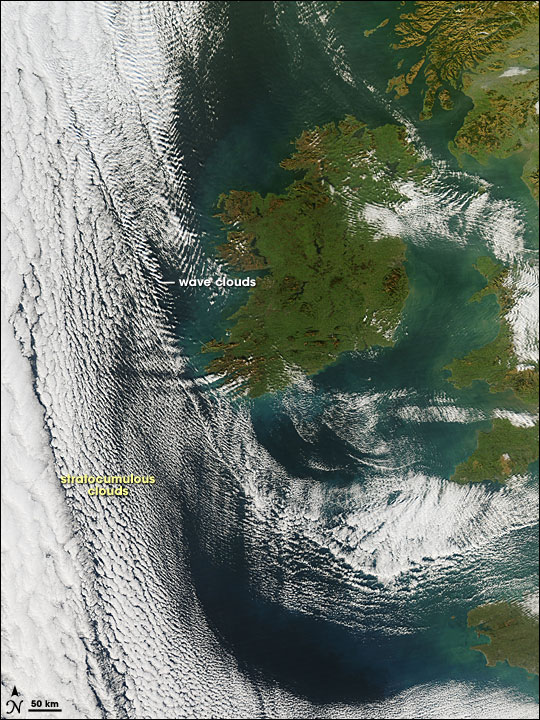 Clouds swirled southwest of the British Isles in mid-December 2007, while skies over the islands remained largely clear. The Moderate Resolution Imaging Spectroradiometer (MODIS) on NASA’s Aqua satellite captured this image on December 17, 2007. In this image, clouds form complex patterns as they arc around the islands, just grazing the western tips of Ireland and southern tip of Great Britain.

A high-pressure system over Ireland, or northeast of the island, could be the cause of the clear skies over land and cloudy skies over water shown in this image. Cold, dry air sinking over the islands and the waters to the northeast would be relatively cloud-free. Once the air spread out over warmer water, clouds would form.

Southwest of Ireland, the clouds arranged in parallel lines appear to be wave clouds formed by the meeting of cool, dry and warm, moist air. Pushed up by cool air, warm air rises, cools, and then falls, riding up on the next wave. Along the wave peaks, clouds form, sometimes forming dramatic patterns. Other clouds have less distinct, more rounded arrangements, although they also appear arranged in lines. These are likely stratocumulous clouds—low-altitude, lumpy clouds. The formation of such clouds over water, away from land, frequently occurs over the Western Atlantic off the U.S. East Coast, when cool air moves over relatively warm ocean water. Combinations of wave and stratocumulous clouds are not uncommon.

As winds streamed past the South Sandwich Islands, the disrupted flow created an interlocking series of wave clouds.

Sharp Line in the Clouds

Dry air surging off the western coast of Africa ran into a wall of moist air over the Atlantic, creating a distinctive line in a marine cloud layer.