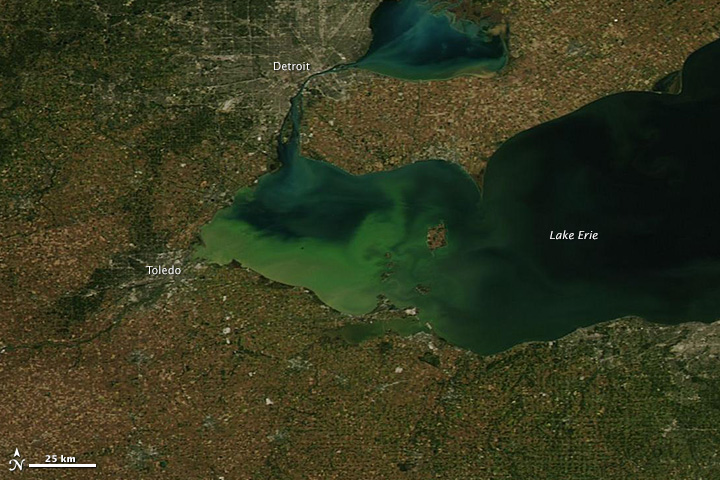 The waters of Lake Erie seem to glow green in this image taken by the Moderate Resolution Imaging Spectroradiometer (MODIS) on NASA’s Aqua satellite on September 26, 2013. The color comes from an algae bloom that has been growing in the lake since July. The bloom is microcystis, a form of blue-green algae that produce liver toxins, causing numbness, nausea, vomiting, and (rarely) liver failure.

Microcystis is a freshwater algae that usually forms when waters are warm. In Lake Erie, runoff from farms and lawns provides extra nitrogen, phosphorous, and other nutrients that allow the algae to flourish. The current bloom is smaller than the record-setting bloom of 2011, but concentrations have been at risky levels at many points throughout the summer. As of September 26, 2013, microcystis concentrations were falling, but the water remained too warm for the bloom to disperse quickly, according to the NOAA Experimental Lake Erie Harmful Algal Bloom Bulletin.

A bloom of freshwater cyanobacteria is the source of the vivid green color in western Lake Erie.