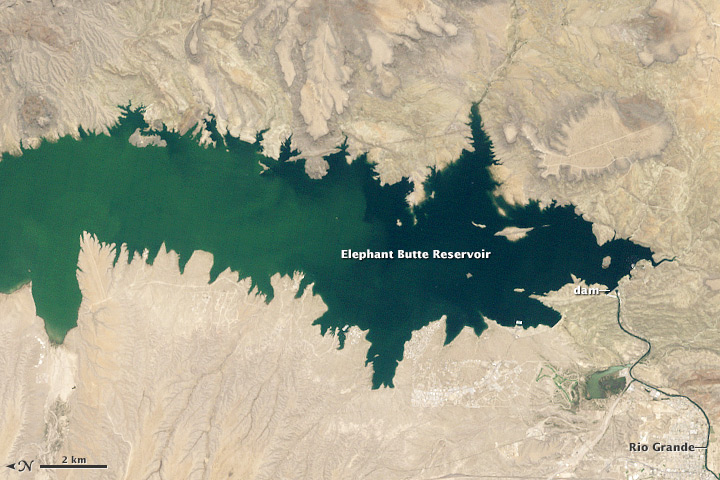 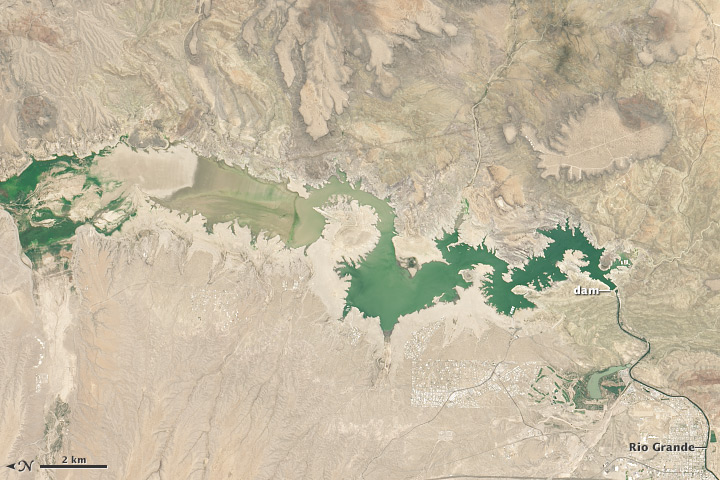 In the summer of 2013, Elephant Butte Reservoir dwindled to its lowest level in forty years. By late July, despite the arrival of monsoon rains, the reservoir was still virtually empty.

Numbers from the U.S. Army Corps of Engineers estimated the total water in storage to be 65,057 acre-feet (0.08 cubic kilometers) on July 24, 2013, about 3 percent of the reservoir’s capacity of 2.2 million acre-feet (2.7 cubic kilometers). The last time water levels were that low was 1972, after droughts in the 1950s and 1960s depleted Elephant Butte. On the other hand, the reservoir was filled nearly to capacity for most of the period between 1985 and 2000.

Located in southern New Mexico and fed by the Rio Grande, Elephant Butte is New Mexico’s largest reservoir. Created in 1915 with the construction of the Elephant Butte Dam, the reservoir provides water for about 90,000 acres (364 square kilometers) of farmland and nearly half the population of El Paso, Texas.

Drought severely strained the system in 2013. Spring runoff from snowpack in the mountains was well below average, and anemic rains throughout the beginning of the year left 80 percent of New Mexico grappling with either “extreme” or “exceptional” drought (the two most severe categories). The arrival of rains from the southwestern monsoon in early July offered a burst of moisture. But the impact on water storage at Elephant Butte was minimal, according to the Albuquerque Journal.

With such limited water supplies in 2013, farmers have faced the shortest irrigation season on record, receiving just three acre-inches (308 cubic meters) instead of three acre-feet (3,700 cubic meters) of water. To meet the demand, El Paso water authorities have had to drill new wells that tap underground aquifers. The city has also increased desalinization efforts and called for voluntary water conservation measures.

The volume of water in New Mexico’s largest reservoir has dropped to historic lows due to drought and persistent demand. 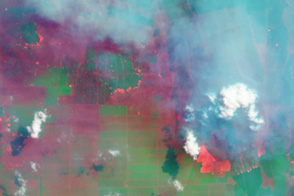