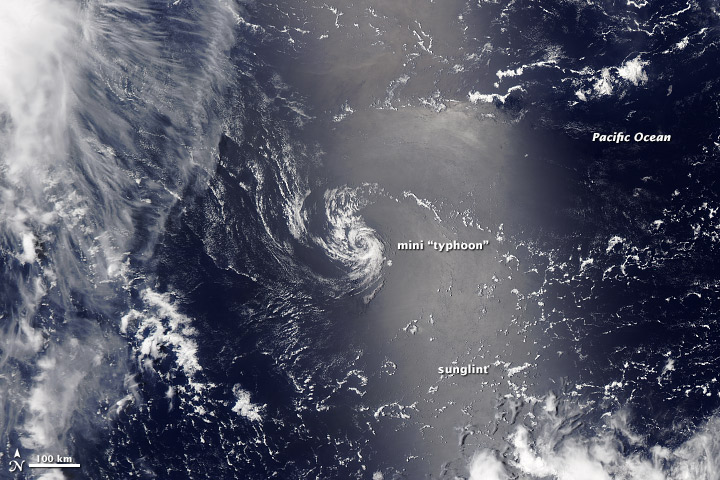 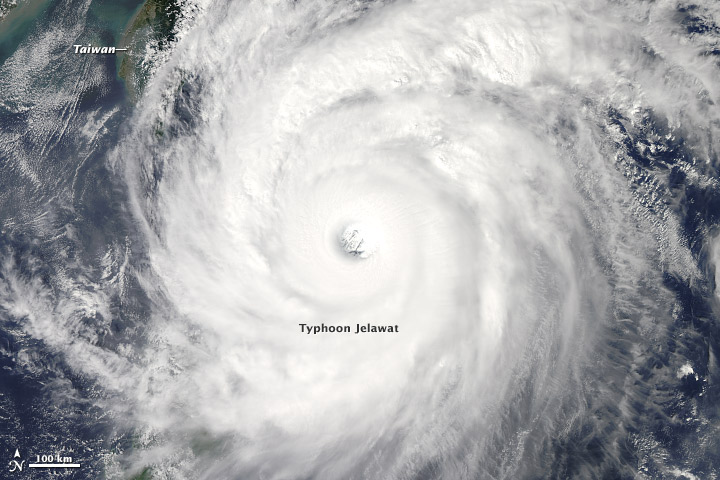 It’s usually the big, sprawling storms that attract the attention of meteorologists, but occasionally tiny storms can make news as well. The most recent example is a suspected mini-typhoon that drifted across the western Pacific Ocean in mid-July 2013. The storm system emerged on July 16 and dissipated by July 19 without making landfall or causing any significant damage.

The Moderate Resolution Imaging Spectroradiometer (MODIS) on NASA’s Terra satellite captured the top image of the storm on July 17, 2013. It had the spiral shape of a tropical cyclone, but the cloud field was less than 100 kilometers (60 miles) across. For comparison, Super Typhoon Jelawat, the most intense storm of the 2012 season, had a cloud field that stretched nearly 1,000 kilometers (600 miles). Jelawat’s eye alone—with a diameter of 64 kilometers (40 miles)—was two-thirds the size of the entire July 2013 storm. The bright streak cutting through the 2013 image is caused by sunglint, a mirror-like reflection of sunlight off of a water surface.

Despite their small size, mini-cyclones are driven by the same forces that drive larger storms. Both small and large cyclonic storms are simply organized convection feeding off warm water in areas with low wind shear. According to the Joint Typhoon Warning Center, the low-pressure areas for these mini-typhoons must span less than two degrees of latitude (about 140 miles) and have sustained winds of 65 knots (74 miles per hour). The 2013 storm in the Pacific certainly meets the first criteria, but it is unlikely that the storm achieved typhoon-force winds. It’s also unlikely that the system had a “warm core,” which all true tropical cyclones have.

“The consensus of the tropical cyclone experts I’ve consulted is that that this feature did not actually meet the criteria of a true tropical cyclone,” said Scott Bachmeier, a research meteorologist at the University of Wisconsin. While the storm did spawn intermittent bursts of deep convection and long-lived cyclonic circulation, it did not appear to derive its energy from the warm waters of the ocean.

While this storm did not cause damage, other mini storms certainly have. In 1974, the miniature cyclone Tracy hit Darwin, Australia, killing 71 people and destroying more than 70 percent of the city’s buildings. According to the National Hurricane Center, tropical cyclone Marco unseated Tracy as the smallest tropical cyclone on record in 2008. Marco had gale force winds that extended just 19 kilometers (12 miles). Typhoon Tip, with gale force winds extending 1,000 kilometers (675 miles) is the largest tropical cyclone on record.

Tropical cyclones come in all sizes. Some researchers wonder if they saw a mini-typhoon drifting across the Pacific Ocean in mid-July 2013.