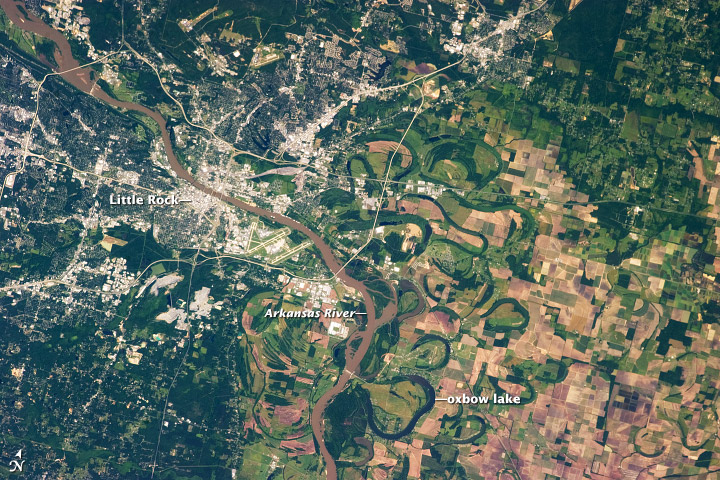 The capital city of Arkansas, Little Rock, occupies a position near the geographic center of the state. It sits between the eroded remnants of the Ouachita Mountains to the west, the Mississippi River Alluvial Plain to the east, and the West Gulf Coastal Plain to the south. This photograph, taken by an astronaut on the International Space Station, highlights the Little Rock metropolitan area and surrounding region. Urban and suburban areas appear light to dark gray, while large facilities and buildings (commercial/industrial, public arenas, etc.) stand out due to expansive light-colored roofs.

The Arkansas River separates Little Rock on the south bank from North Little Rock on the north bank. Frequent changes in the position of the river channel through geologic time are recorded as numerous current and former oxbow lakes visible within extensive agricultural fields. Oxbow lakes are formed on river floodplains when wide meander bends are “pinched off” due to the river cutting a shorter channel across the bend. The process forms a lake, which typically becomes filled in with sediment over time; vegetation outlines a distinctive curved pattern visible from above.

The city of Little Rock takes its name from a small outcrop located on the south bank of the Arkansas River. This outcrop served as a landmark for navigating the river during the city’s early development as a center of regional commerce—a role the city still enjoys today.

Astronaut photograph ISS036-E-3918 was acquired on May 24, 2013, with a Nikon D3S digital camera using a 400 millimeter lens, and is provided by the ISS Crew Earth Observations experiment and Image Science & Analysis Laboratory, Johnson Space Center. The image was taken by the Expedition 36 crew. It has been cropped and enhanced to improve contrast, and lens artifacts have been removed. The International Space Station Program supports the laboratory as part of the ISS National Lab to help astronauts take pictures of Earth that will be of the greatest value to scientists and the public, and to make those images freely available on the Internet. Additional images taken by astronauts and cosmonauts can be viewed at the NASA/JSC Gateway to Astronaut Photography of Earth. Caption by William L. Stefanov, Jacobs/JETS at NASA-JSC.

The landscape is defined by hills to the west and by the river running through it, not to mention the oxbow lakes that water left behind.

Near the city of Little Rock, the river has meandered for decades, leaving its marks across the landscape.

Set on bluffs above the muddy, flood-prone Mississippi River, the city has long been a crossroads of water-borne and land transportation in the heartland of America.