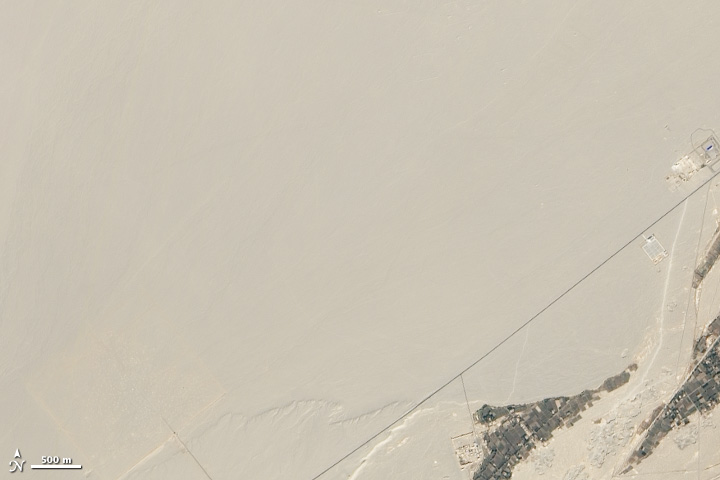 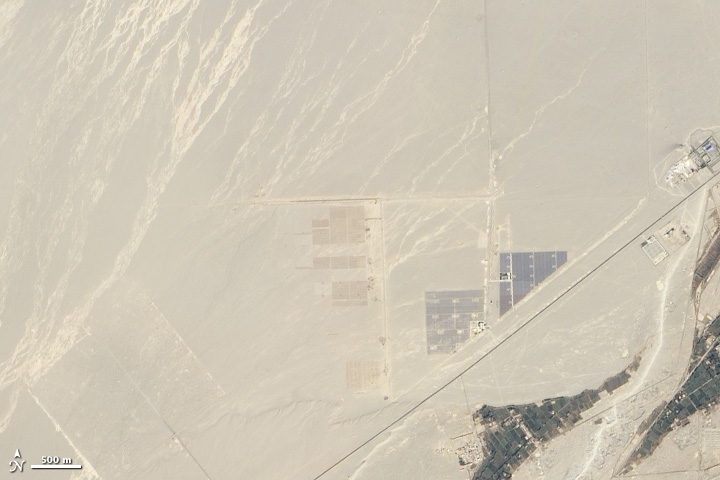 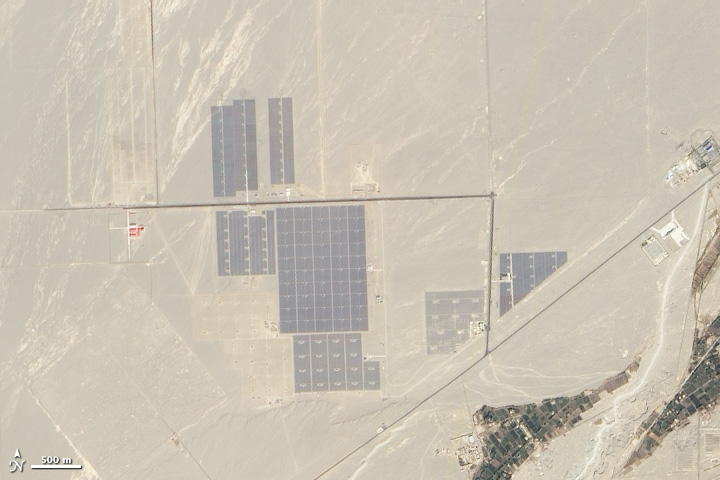 For centuries, traders along the Silk Road relied on the oasis at Dunhuang for a reprieve from the withering sunlight and heat of the Gobi desert. By 2011, a large solar farm on the outskirts of the city had started transforming that searing light into an energy resource for the region.

The Advanced Land Imager (ALI) on the Earth-Observing-1 (EO-1) satellite captured this series of images showing the installation of solar power panels on the outskirts of Dunhuang in the Gansu province of western China. In 2006 (top image), barren desert dominated, except for the road and a few patches of agricultural fields (lower right). By 2011 (middle image), grids of photovoltaic panels began to appear in large numbers. By 2012 (lower image), thousands of square meters were covered.

Chinese authorities hope to expand the electricity-generating capacity of Dunhuang’s solar farms in the future. The State Council (China’s equivalent of the cabinet) set a goal of increasing Dunhuang’s solar power generating capacity to 1 gigawatt by 2020. For context, China’s total installed solar capacity at the end of 2011 was about 3.1 gigawatts; the United States had 4.4 gigawatts of capacity by the same date.

Space and sunlight will not be limiting factors to expansion. There are more than 3,500 square kilometers (1,400 square miles) of unused land around Dunhuang, and the area receives about 3,250 hours of sunlight per year. (See this list to see how that compares to major cities around the world.)

An oasis along the ancient Silk Road has become a hub of solar power production in China. These images show the expansion of solar power facilities between 2006 and 2012.

Appears in this Collection:
Renewable and Alternative Energy

Growth of Solar in the Gobi Desert

An increasing number of solar panels take advantage of the desert’s copious sunshine.

China has more capacity to generate solar power than any other country, but getting the power to where it is most needed can be a challenge.

Catching Rays in the Desert

Egypt is near completion of one of the world’s largest solar energy installations.