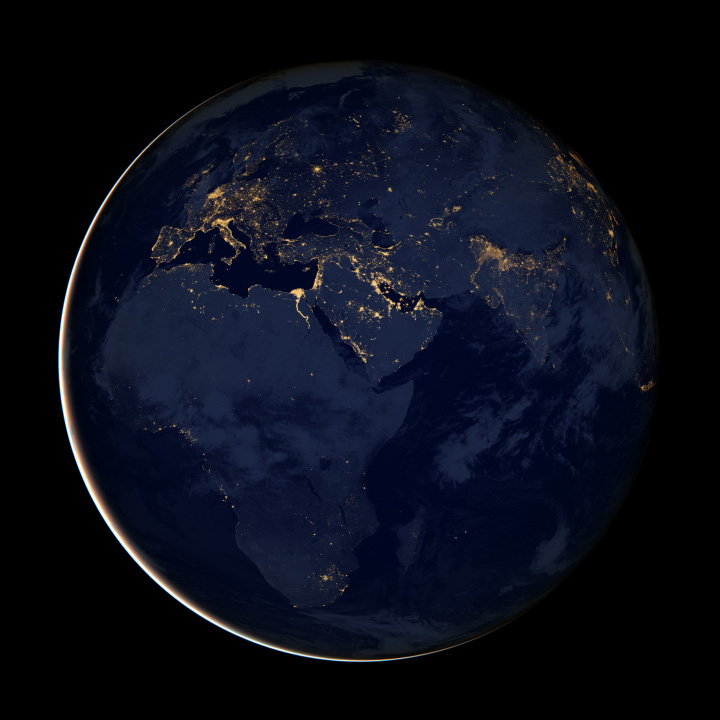 This new image of Europe, Africa, and the Middle East at night is a composite assembled from data acquired by the Suomi NPP satellite in April and October 2012. The new data was mapped over existing Blue Marble imagery of Earth to provide a realistic view of the planet.

The nighttime view was made possible by the new satellite’s “day-night band” of the Visible Infrared Imaging Radiometer Suite. VIIRS detects light in a range of wavelengths from green to near-infrared and uses filtering techniques to observe dim signals such as gas flares, auroras, wildfires, city lights, and reflected moonlight. In this case, auroras, fires, and other stray light have been removed to emphasize the city lights.

“Night time imagery provides an intuitively graspable view of our planet,” says William Stefanov, senior remote sensing scientist for the International Space Station program office. “They provide a fairly straightforward means to map urban versus rural areas, and to show where the major population centers are and where they are not.”

Named for satellite meteorology pioneer Verner Suomi, NPP flies over any given point on Earth's surface twice each day at roughly 1:30 a.m. and p.m. The polar-orbiting satellite flies 824 kilometers (512 miles) above the surface, sending its data once per orbit to a ground station in Svalbard, Norway, and continuously to local direct broadcast users distributed around the world. The mission is managed by NASA with operational support from NOAA and its Joint Polar Satellite System, which manages the satellite's ground system.

Appears in these Collections:
Blue Marble
Earth at Night 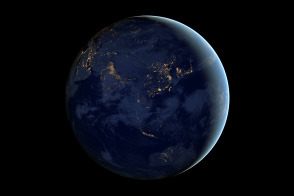 City Lights of Asia and Australia

City Lights of the United States 2012

Updated for 2012, this map of lights across America has a least 10 times better resolution than previous maps.