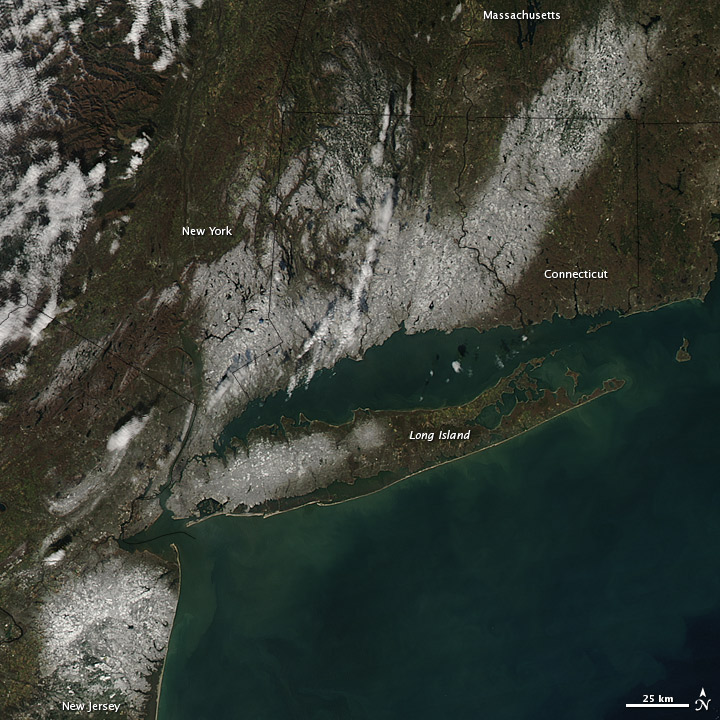 In early November 2012, a wintery nor’easter followed on the heels of Hurricane Sandy. When that second storm cleared out of the region, it left behind snow stretching from New Jersey to Massachusetts. The Moderate Resolution Imaging Spectroradiometer (MODIS) on NASA’s Aqua satellite captured this natural-color view of the region on November 9, 2012.

The National Weather Service’s Philadelphia / Mt. Holly (N.J.) forecast office reported that snowfall from the storm was “considerably worse than forecast for portions of northern and central New Jersey,” but less than forecast in other areas.

From the vantage point of MODIS, snowfall was the visible impact of the storm. But the areas blanketed in white were not the only ones affected by the storm. The National Weather Service also observed wind gusts up to 65 miles (105 kilometers) per hour; high waves and minor coastal flooding in New Jersey and Delaware; and 1.5 inches (4 centimeters) of rain along the New Jersey coast. Similar conditions were reported in coastal New England.

The nor’easter hit areas already struggling in the aftermath of Hurricane Sandy, including those suffering through ongoing power outages. The Associated Press reported that tens of thousands of customers in New York and New Jersey remained without electricity two weeks after Sandy’s landfall.

Acquired November 9, 2012, this image shows snowfall left by a nor’easter that arrived shortly after Hurricane Sandy.

Acquired February 10, 2013, this image shows snow left in New England by a nor’easter.

Winter Storm over the United States

Snow covers the desert Southwest in the wake of a winter storm that impacted much of the United States.