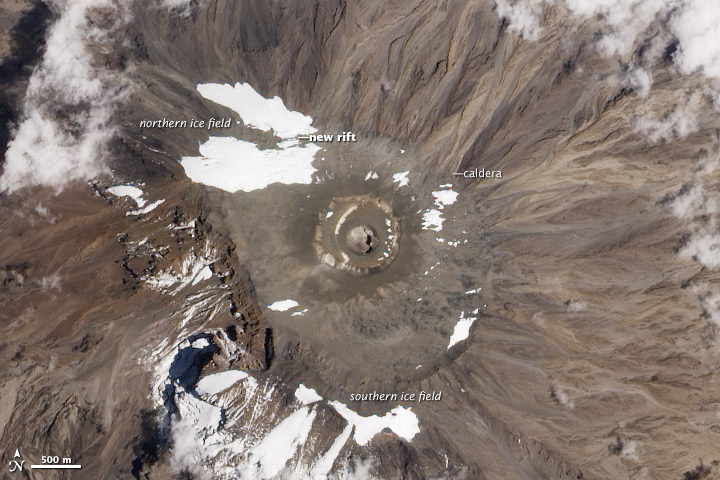 The views from the top of Mount Kilimanjaro—a 5,895-meter (19,341-foot) dormant stratovolcano in Tanzania—are as surreal as they are spectacular. After ascending through multiple ecosystems—including cropland, lush rainforest, alpine desert, and a virtual dead zone near the summit—climbers can find themselves peering down on a thick blanket of clouds below that seems to stretch endlessly in the distance.

But in the immediate foreground, ice dominates the view. Looking north, a shelf-like block of ice with a sharp vertical cliff sits on an otherwise featureless, sand-covered plateau. In the other direction, a second ice field spills off the edge of the plateau, down the mountain’s southern face.

Kimberly Casey, a glaciologist based at NASA’s Goddard Space Flight Center, was savoring the views from Kilimanjaro’s summit and caldera when she snapped these panoramic images of Kilimanjaro’s northern (middle) and southern (bottom) ice fields. The Advanced Land Imager on NASA’s Earth Observing-1 satellite acquired the top image, which shows some of the same ice fields from above on October 26, 2012.

Casey was taking part in a September 2012 research expedition to Kilimanjaro to study the ice at the summit. For scale, bright tents that were part of the scientists' base camp are visible in the lower left of the northern ice field image.

Despite Mount Kilimanjaro’s location in the tropics, the dry and cold air at the top of the mountain has sustained large quantities of ice for more than 10,000 years. At points, ice has completely surrounded the crater. Studies of ice core samples show that Kilimanjaro’s ice has persisted through multiple warm spells, droughts, and periods of abrupt climate change.

But trends beginning more than a century ago suggest Kilimanjaro’s peaks may soon be ice-free. Between 1912 and 2011, the mass of ice on the summit decreased by more than 85 percent. Researchers say it’s no longer a question of whether the ice will disappear but when. Estimates vary, but several scientists predict it will be gone by 2060.

Rising air temperatures due to global warming could be contributing to the ice loss, but a number of other factors are just as important, if not more so. An increasingly dry regional atmosphere, for example, is starving the mountain of the fresh snow needed to sustain the ice fields. Drier air is also reducing cloud cover and allowing more solar energy to warm the ice surfaces.

Casey and colleagues noticed yet another ominous sign during their 2012 expedition. The northern ice field, which had been developing a hole since the 1970s, has separated. “This was the first year that the northern ice field completely divided into two,” said Casey. “We were able to walk on land—or we could have even ridden a bicycle—directly through the rift.”

Grounded in the Caspian Sea

A diamond-shaped piece of ice is a stranger amid thin ice.