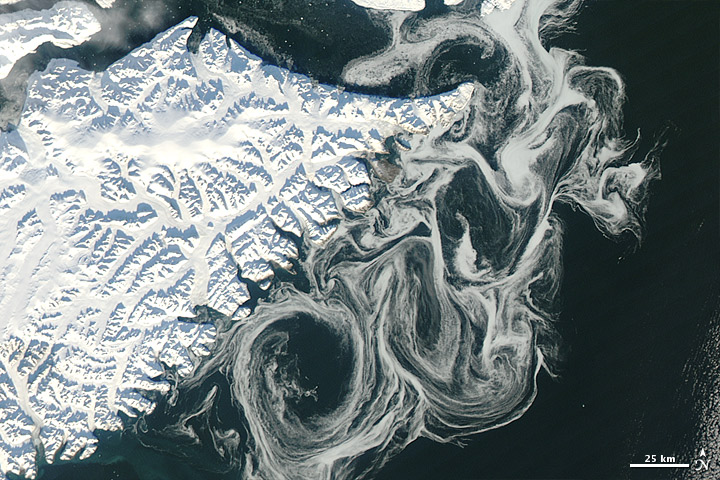 Sea water off the east coast of Greenland looked a bit like marbled paper in October 2012. The shifting swirls of white were sea ice, as observed by the Moderate Resolution Imaging Spectroradiometer (MODIS) on NASA’s Aqua satellite on October 17, 2012. In fact, this ice moved discernibly between October 16 and October 17. Thin, free-drifting ice moves very easily with winds and currents.

Each year, Arctic sea ice grows through the winter, reaching its maximum extent around March. It then melts through the summer, reaching its minimum in September. By October, Arctic waters start freezing again. However, the ice in the image above is more likely a remnant of old ice that migrated down to the coast of Greenland. Sea water is unlikely to start freezing this far south in October.

Along Greenland’s east coast, the Fram Strait serves as an expressway for sea ice moving out of the Arctic Ocean. The movement of ice through the strait used to be offset by the growth of ice in the Beaufort Gyre. Until the late 1990s, ice would persist in the gyre for years, growing thicker and more resistant to melt. Since the start of the twenty-first century, however, ice has been less likely to survive its trip through the southern part of the Beaufort Gyre. As a result, less Arctic sea ice has been able to pile up and form multi-year ice.

With less thick ice there is less Arctic sea ice volume, something the researchers at the Polar Science Center at the University of Washington have modeled from 1979 to 2012. Their results appear in the graph above. The model indicates that ice volume peaks in March through May of each year and reaches its lowest levels from August through October. But while the seasonal timing of the peaks and valleys has remained consistent since 1979, the total sea ice volume has declined.

The drop in sea ice volume is consistent with other observed changes in Arctic sea ice. In terms of sea ice extent, the National Snow and Ice Data Center and NASA reported that Arctic sea ice set a record low in September 2012. 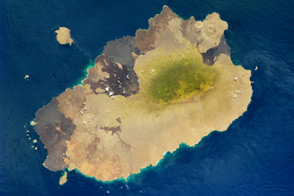 The extent of Arctic sea ice peaked at 15.24 million square kilometers on March 18, 2012. It was the ninth consecutive year of maximum extents below the long-term average.