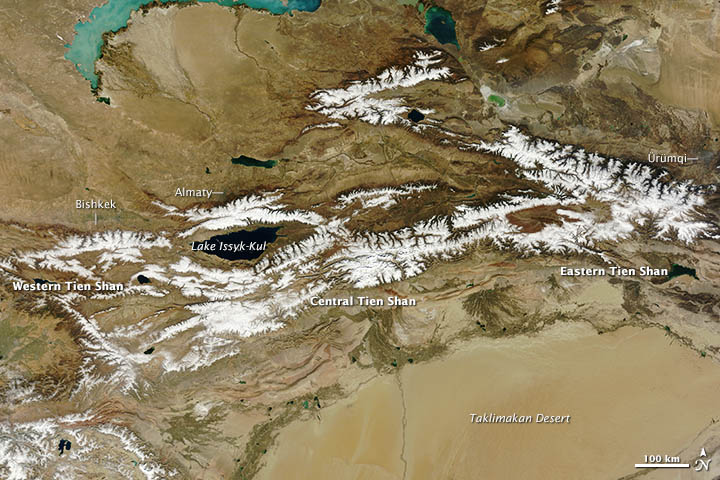 The Himalayas—which began forming about 50 million years ago when the Indian subcontinent started to collide with Eurasia—are arguably the world’s best-known snow-capped mountain range. But just to the north, beyond the Tarim Basin, the same tectonic forces that built the Himalayas also produced the Tien Shan, a similarly vast range of snow-capped peaks that extends 2,500 kilometers (1,500 miles) through Uzbekistan, Tajikistan, Kyrgyzstan, Kazakhstan, and western China.

The Moderate Resolution Imaging Spectroradiometer (MODIS) instrument on NASA’s Terra satellite acquired this view of the sprawling range on October 9, 2012. It shows glacial ice with a layer of fresh snow covering the ice in many areas. (See this MODIS image from August 31, 2012, to see the same area with less snow.)

Geographers usually divide the Tien Shan into western, northern, central, and easterm ranges. The western and northern ranges have a milder and relatively moist climate, while the central and eastern ranges have a more severe climate, characterized by frigid winters and searing summers.

Many parts of the Tien Shan are cold enough to sustain glaciers. Some of the highest peaks and largest glaciers are clustered in the central range east of Lake Issyk-Kul, the large salt lake near the center of the image. Although the lake is surrounded by snow-capped mountains and situated at a high altitude, it does not generally freeze because of its high salinity.

Tien Shan’s glaciers play a crucial role in Central Asia’s hydrological cycle. An estimated 15 percent of freshwater runoff in Kyrgyzstan comes from glaciers, and the contribution can be much higher during the melting season, according to an analysis published in October 2012.

In the summer especially, cities such as Almaty, Bishkek, Tashkent, and Ürümqi rely heavily on freshwater from glaciers for irrigation and for household consumption, according to Annina Sorg, the Bern University researcher and lead author of the 2012 paper. Based on a review of numerous studies, she concluded that Tien Shan’s glaciers have retreated in recent decades due to changing climate conditions.

Glaciers on the Tien Shan, a long mountain range that runs through central Asia, serve as a key source of freshwater for cities in the region.

This astronaut photograph provides a view of the central Tien Shan mountains east of where the borders of China, Kyrgyzstan, and Kazakhstan meet.