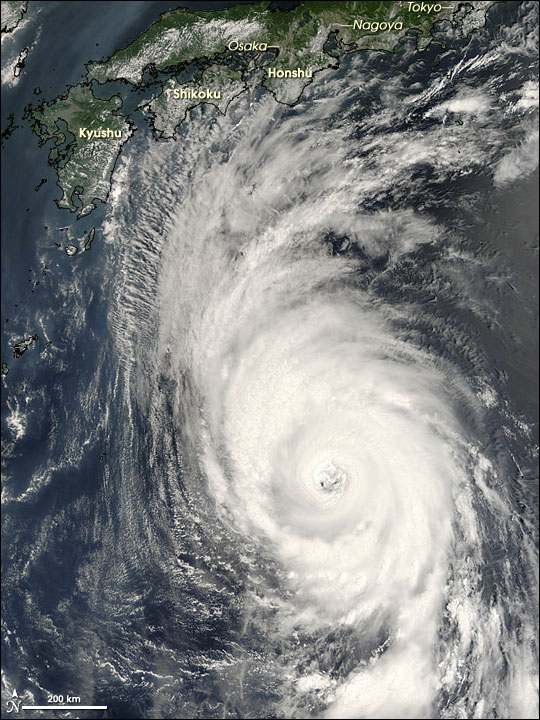 Category 4 Typhoon Usagi was stretched across the Pacific Ocean southeast of Japan in a long oval shape when the Moderate Resolution Imaging Spectroradiometer (MODIS) on NASA’s Terra satellite captured this image on August 1, 2007. The spiraling bands of rain clouds in the northwest quadrant of the storm appear to be reaching out for the islands of Shikoku and Honshu. Several large cities occupy these southern islands, which means millions of residents had to keep nervous eyes on the storm.

Typhoon Usagi was at its maximum intensity when Terra MODIS captured this image on the morning on August 1. With its tightly wound bands of clouds, nearly symmetrical shape, and well-defined eye, Usagi bore the hallmarks of an extremely powerful tropical cyclone. At the time, the storm packed sustained winds of 222 kilometers per hour (120 knots or 138 miles per hour) with gusts to 269 km/hr (145 knots of 167 mph). Usagi weakened slightly in the hours that followed, and was forecast to weaker further before striking Japan late on August 2 or early on August 3, said the Joint Typhoon Warning Center.

Usagi is the fifth named storm in the western Pacific in 2007, and it is the second Category 4 storm to form in July. Its predecessor, Man-Yi, also troubled Japan. It pounded Okinawa and then veered northeastward, raking the east coast of the southern islands. According to the Japan Meteorological Agency, August and September are the most active months for tropical cyclones in this part of the Pacific, with an average of 5.5 and 5.1 storms, respectively.

Category 4 Typhoon Usagi was stretched across the Pacific Ocean southeast of Japan in a long oval shape when MODIS captured this image on August 1, 2007.

Typhoon Usagi, the fourth typhoon of 2007, churned across the northwestern Pacific Ocean heading towards Japan in late July and early August.