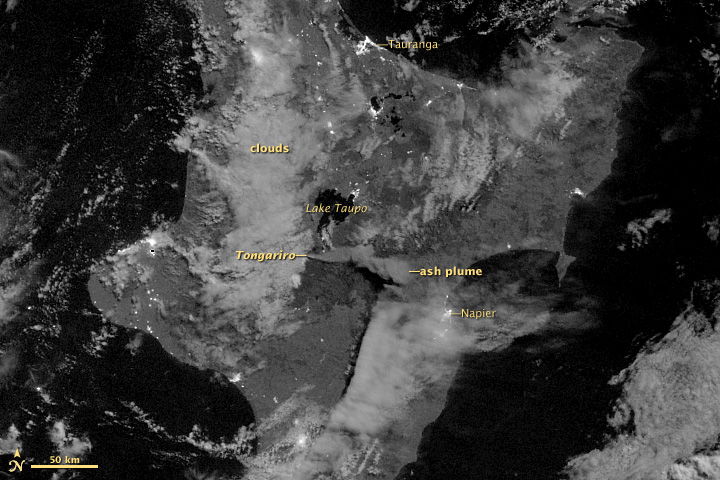 Late on August 6, 2012, New Zealand’s Mount Tongariro erupted for the first time in 115 years, spewing a cloud of ash over North Island, closing roads, and cancelling domestic flights. A new satellite equipped with low-light imaging technology was able to capture the event in the dark of night, just an hour after it began.

According to scientists, this is Mount Tongariro’s first eruption since 1897. The volcano lies in a mostly undeveloped part of the country, and no injuries were reported. The 1,978-meter (6,490 foot) peak is a popular spot for hikers and is right next to Mount Ngauruhoe, the stand-in for Mount Doom in the Lord of the Rings movies. Both Tongariro and Ngauruhoe are part of the “circum-Pacific seismic belt” or “Ring of Fire” region known for its seismic activity and volcanism.

The image above shows Mount Tongariro as it appeared at 12:55 a.m. New Zealand time on August 7, 2012 (12:55 p.m. Universal Time on August 6). The image was acquired by the Visible Infrared Imaging Radiometer Suite (VIIRS) on Suomi NPP, which includes a “day-night band” that can detect volcanic ash plumes lit by moonlight alone. (VIIRS also can detect the visible light emitted by pyroclastic flows and fires, though they are not visible in this particular image.)

The detection of volcanic plumes is useful because ash can endanger airplanes in flight. “Volcanic ash is very different in composition than the biomass smoke produced by a forest fire,” said Steven Miller of the Cooperative Institute for Research in the Atmosphere at Colorado State University. “Very often volcanic ash contains microscopic fragments of volcanic glass (obsidian), and the turbine engines of commercial aircraft produce a level of heat sufficient to melt glass. The ash can melt onto the turbine blades and other parts of the engine, causing damage and even engine stalls. It also presents hazards to pilot visibility, causing pits and frosting on the windshields in the same way that a sandstorm damages an automobile windshield.”

The New Zealand Herald reported that Tongariro sent ash at least 20,000 feet (6,100 meters) into the air. Because of the impact to aircraft operations, the New Zealand Civil Aviation Authority issued advisories to re-route air traffic around the ash plume so as to avoid damage to aircraft engines. For instance, in 1989, a KLM Boeing 747 commercial jet flew right into an ash plume produced by Alaska’s Mt. Redoubt.

“It is interesting to note that the ash downwind was lofted fairly high,” said William Straka of the Cooperative Institute for Meteorological Satellite Studies at the University of Wisconsin. The first appearance of the ash plume occurred far downwind of Tongariro in thermal imagery because ash was lofted high enough to produce a strong thermal contrast in the atmosphere.

Miller noted that images from the new day/night band sensor can be combined with thermal images to give a more complete view of activity on Earth’s surface. Getting thermal data close to a volcano with conventional infrared sensors is difficult, but VIIRS can detect them close to the source and lower in the atmosphere. “Such information can give forecasters a heads-up in terms of changes in ash production and low-level wind shifts that may re-direct these hazardous plumes,” said Miller.

According to New Zealand's Ministry of Civil Defence and Emergency Management on August 7, the eruption activity seemed to have subsided. “White steam clouds were observed at the historically active Te Maari craters area,” the ministry reported. “There is no ash being produced from the volcano presently. There have been no lahars or pyroclastic flows or lava flows.”

A new satellite captured the eruption of a volcano at night on New Zealand's North Island. 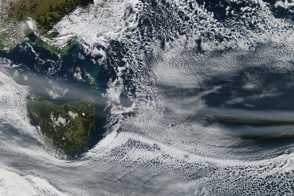 Ash from Puyehue-Cordón Caulle over Australia and New Zealand

A powerful volcanic eruption in South America sent volcanic ash around the world to stop air traffic in New Zealand and Australia. The ash plume is distinct in these images of the two countries.

Mount Redoubt sent a column of ash some 19 kilometers skyward. On March 23, 2009, ash was visible on the snowy land surface north of the volcano.