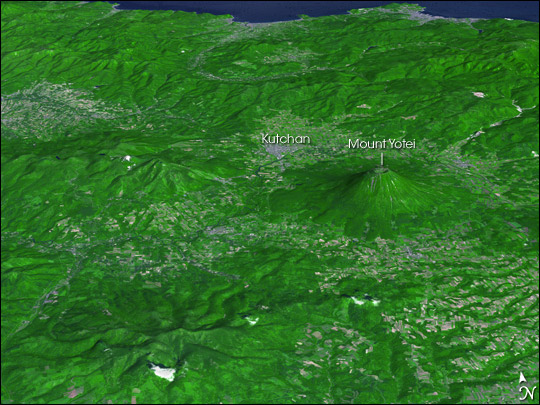 Cities mingle with rugged hills and a dormant volcano in this image of Hokkaido, Japan. This three-dimensional image comes from observations made by the Advanced Spaceborne Thermal Emission and Reflection Radiometer (ASTER) on NASA’s Terra satellite on July 23, 2006. The view is toward the north and slightly east.

Green indicates vegetation; beige and gray indicate bare ground, paved surfaces, or buildings; and dark blue indicates water. The water body at the top of the image is the Pacific Ocean.

Now dormant, Mount Yotei is a stratovolcano—a symmetrical cone composed of alternating layers of hardened lava, solidified ash, and volcanic rocks ejected in previous eruptions. It reaches a height of 1,898 meters (6,227 feet), and its summit sports a 700-meter- (2,297-foot-) wide crater. Snow often caps this volcano, but in this summertime shot, the volcano’s summit is snow-free. The volcano is also known as Ezo-Fuji for its resemblance to Mount Fuji.

As angular patches of gray and beige indicate, urban areas surround the volcano, most notably the city of Kutchan to the northwest. Even when volcanoes remain active, people often settle close to them, drawn by benefits of good soil and mild climates that appear to outweigh the risks.

Asama Volcano on the Japanese island of Honshu showed signs of unrest, including ash plumes and increased seismic activity, starting in late January 2009.

Asama Volcano on the Japanese island of Honshu showed signs of unrest, including ash plumes and increased seismic activity, starting in late January 2009.

Eruptions of Mount Oyama progressively covered the volcano's slopes with more and more ash over the last half of 2000.