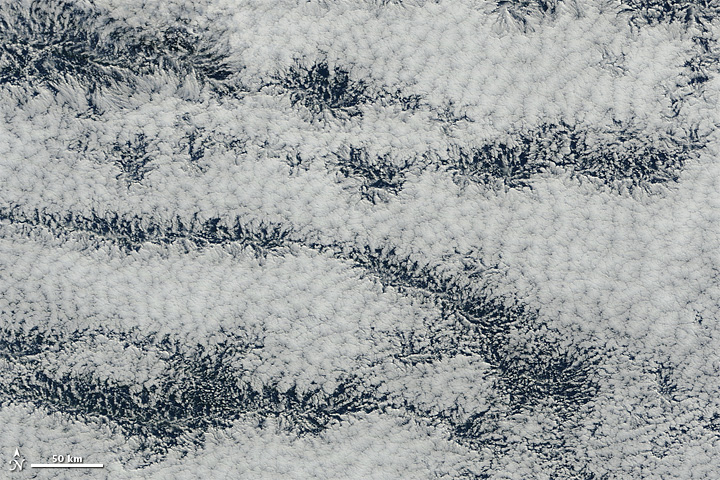 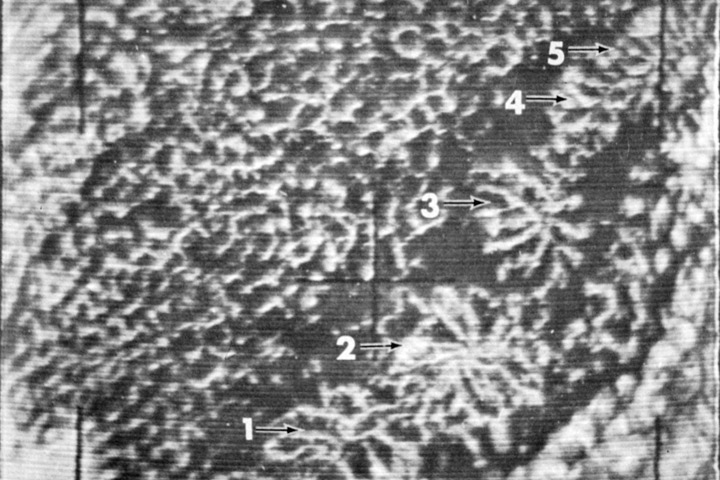 Although people have observed clouds for tens of thousands of years, one group of clouds long escaped human detection. Not because those clouds were too small to see, but because they were too big. The dawn of the satellite era changed that, revealing a type of cloud that scientists named “actinoform.” The name of these radial, or leaf-shaped, clouds is based on the Greek term for “ray.”

The first recorded detection of an actinoform cloud occurred on August 16, 1962, southwest of Hawaii. NASA’s Television Infrared Observation Satellite V (TIROS V) observed a chain of the clouds west of Peru on October 7, 1962 (second image above). This was was the first picture featured in the “Picture of the Month” series in Monthly Weather Review. The caption read: “It is appropriate that this series begins with a type of cloud pattern discovered on TIROS pictures. The numbered arrows indicate a line of actinoform patterns presumably in various stages of development. Numbers 4 and 5 almost merge and 1 is poorly organized, but the typical pattern is easily seen in 2 and 3.”

Over the past five decades, accumulating satellite observations have shown that actinoform clouds are more common and more complex than originally thought. They occur practically everywhere that marine stratus or stratocumulus clouds form. As indicated in the TIROS image, these cloud fields can link together, forming chains several times as long as any individual actinoform cloud.

The last 50 years have not only seen plentiful observations of actinoform clouds, but also improvements in satellite technology. The top image above was acquired by the Moderate Resolution Imaging Spectroradiometer (MODIS) on NASA’s Terra satellite on June 28, 2012. The image shows multiple cloud types: open- and closed-cell and actinoform clouds.

NASA-sponsored research has linked the clouds to recurring weather patterns in Southern California. While actinoform clouds look appealing from the perspective of a satellite sensor, on the ground they have proven less charming. Depending on the season, actinoform clouds can blow ashore, bringing gloomy, drizzly weather with them. In California, these cloud fields are associated with weather patterns nicknamed May Gray and June Gloom.

Beyond their role in weather, clouds play an important role in regulating Earth’s temperature—reflecting solar radiation back into space during the day, and trapping heat at night. For the last 50 years, the satellite sensors have observed these complicated, frequently occurring actinoform clouds, providing an enhanced understanding of weather, along with pretty pictures.