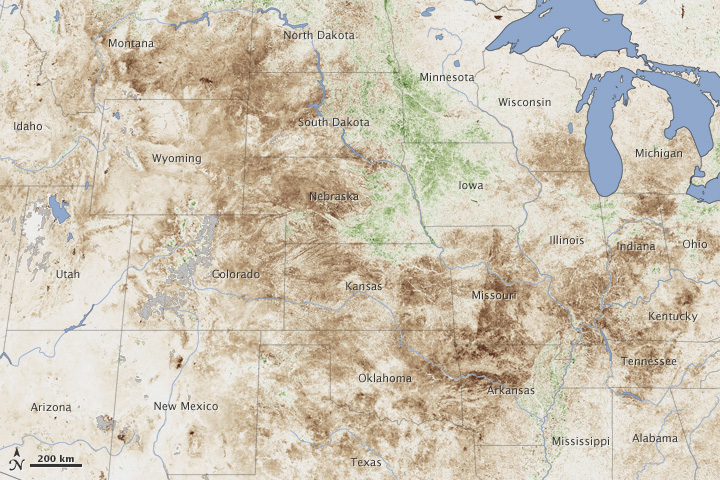 Farmers across the United States hoped for rain in July 2012 as a drought of historic proportions parched key commodity crops, including corn, soybeans, and wheat. On July 11, the United States Department of Agriculture announced that more than 1,000 counties in 26 states qualified as natural disaster areas—the largest total area ever declared a disaster zone by the agency.

The extent of the damage to crops is depicted in this vegetation anomaly map based on data from the Moderate Resolution Imaging Spectroradiometer (MODIS) on NASA’s Terra satellite. The map contrasts plant health in the central United States between June 25 and July 10, 2012, against the average conditions between 2002 and 2012. Brown areas show where plant growth was less vigorous than normal; cream colors depict normal levels of growth; and green indicates abnormally lush vegetation. Data was not available in the gray areas due to snow or cloud cover. The image is based on the Normalized Difference Vegetation Index (NDVI), a measure of how much plant leaves absorb visible light and reflect infrared light. Drought-stressed vegetation reflects more visible light and less infrared than healthy vegetation.

The most severe damage to crops appears to be centered on Missouri, Arkansas, Oklahoma, Texas, Kansas, Nebraska, and South Dakota. Crops in much of the upper Midwest—southern Wisconsin, Michigan, Indiana, southern Illinois, western Kentucky, and western Tennessee—also show signs of strain. States in the Mountain West that are in the midst of a busy wildfire season—Montana, Wyoming, and Colorado—have also experienced marked declines in the health of vegetation. The drought has been less severe in Iowa, a key corn-growing state.

This drought, like all extreme weather events, has its direct cause in a complex set of atmospheric conditions that produce short-term weather. However, weather occurs within the broader context of climate, and there’s widespread agreement among scientists that the climate is changing due to human activity.

According to a recent IPCC report on extreme weather, there is “medium confidence” that droughts have grown longer and more severe in some parts of the world since 1950, particularly in southern Europe and West Africa. However, the trends appear to be the reverse for droughts in central North America and northwestern Australia. Overall, the scientists who prepared the IPCC report assert a medium level of confidence in their ability to attribute observed changes in drought patterns to human activity.

In a dry spell of historic proportions, more than half of the country faced severe or moderate drought.

Nearly two-thirds of the continental United States suffered some form of drought in the summer of 2012.

Dried Out Vegetation Across America

In August 2012, satellites observed the effects of drought and heat waves on vegetation from the Rocky Mountains to the Mississippi River.

Drought across the United States

Extreme heat helped push as much as 26 percent of the contiguous United States into drought in July 2011. This image shows the impact on plants throughout the month.

Vegetation is withering across Central Chile.