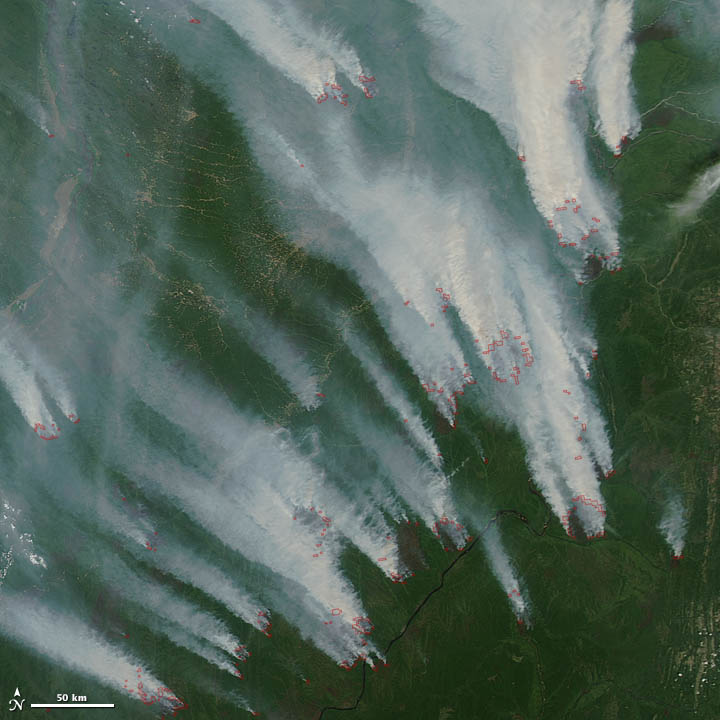 As in the western United States and northern Canada, Russia is ablaze. On July 11, 2012, more than 25,000 hectares (97 square miles) of forests were burning, according to the Russian Federal Forestry Agency. Most of the fires—uncontrolled wildfires in boreal forests—were in central and eastern Siberia.

Smoke from large wildfires in Siberia can be lofted high enough into the atmosphere for winds to push the plumes across the Pacific Ocean to North America. On July 8 and 9, 2012, smoke from Siberia arrived in British Columbia, Canada, and caused ground-level ozone to reach record high levels.

On July 6, NASA Goddard Space Flight scientist Jon Ranson—who is in the midst of a field expedition in Siberia—observed the fires firsthand during a flight between St. Petersburg and Krasnoyarsk. He described the scene on the blog he’s using to chronicle the expedition:

“We left St. Petersburg near sunset, with the sun low on the horizon. Smoky sunsets create very red skies, and the colors were pretty spectacular. It reminded me of the sunsets I saw just a few weeks ago when I visited Greely, Colorado. I was close to the High Park fire, and the sky was an amazing, blazing orange at sunset. That was only one fire, however. Dozens, or maybe hundreds, colored the sky on July 6 as we passed above the smoke. We flew over a huge, curving river of thick smoke. It truly looked like a river flowing, I think, generally north to south.”

Ranson’s team, which conducted field research in Siberia in 2010 as well, is researching whether global warming is affecting the fire return interval (the amount of time that elapses between fires in a given area) at a field site in northern Siberia. Scientists expect that the return interval will decrease in the future and that wildfires in Siberia will become more frequent. Ranson touched on the topic in the same blog post:

“In 2010, we came to Siberia by way of Beijing because the forests around Moscow were burning. That year, we worked an area north of Tomsk, near the Ob River. We didn’t have fire there that year, but we did see some fairly fresh burn scars. Now, two years later, our flights are again delayed by widespread blazes in taiga. And our 2012 study area appears to be on fire—so soon. It is sobering to realize that in two years so close together that the taiga has suffered such extreme fires. Is this the result of climate change? Or a freak occurrence? What I know, for sure, is that these fires appear to be consuming a lot of forest. They must be releasing a whole lot of carbon into the atmosphere, and what happens here does affect the rest of our world.”

Thick smoke billowed from fires in Yakutia on July 10, 2012. 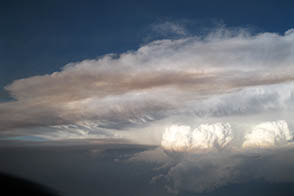 Night View of Fires in Siberia

The Suomi NPP satellite carries an instrument so sensitive to low light levels that it can detect wildfires in the middle of the night.

Visitors to Russia’s Lake Baikal have been met with smoke and ash from wildfires raging in the area.