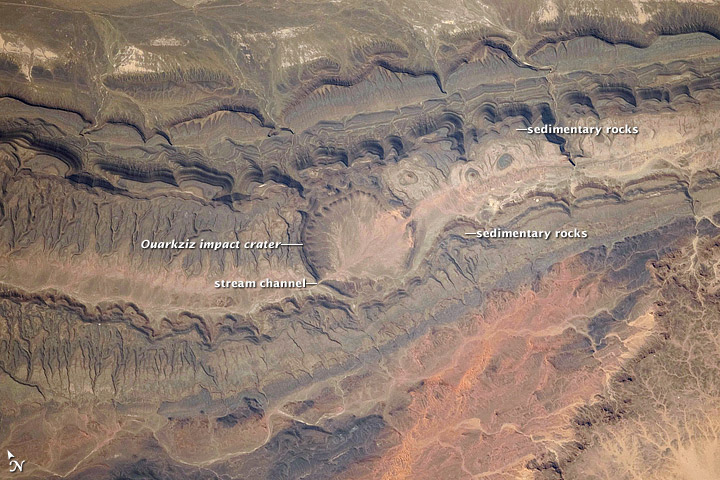 The Ouarkziz Impact Crater is located in northwestern Algeria, close to the border with Morocco. The crater was formed by a meteor impact less than 70 million years ago, during the late Cretaceous Period of the Mesozoic Era, or “Age of Dinosaurs.”

Originally called Tindouf, the 3.5-kilometer wide crater (image center) has been heavily eroded since its formation; however, its circular morphology is highlighted by exposures of older sedimentary rock layers that form roughly northwest to southeast-trending ridgelines. From the vantage point of an astronaut on the International Space Station, the impact crater is clearly visible with a magnifying camera lens.

A geologist interpreting this image to build a geological history of the region would conclude that the Ouarkziz crater is younger than the sedimentary rocks, as the rock layers had to be already present for the meteor to hit them. Likewise, a stream channel is visible cutting across the center of the structure, indicating that the channel formed after the impact had occurred. This Principal of Cross-Cutting Relationships, usually attributed to the 19th century geologist Charles Lyell, is a basic logic tool used by geologists to build relative sequence and history of events when investigating a region.

Astronaut photograph ISS030-E-254011 was acquired on April 21, 2012, with a Nikon D3X digital camera using a 400 mm lens, and is provided by the ISS Crew Earth Observations experiment and Image Science & Analysis Laboratory, Johnson Space Center. The image was taken by the Expedition 30 crew. It has been cropped and enhanced to improve contrast, and lens artifacts have been removed. The International Space Station Program supports the laboratory as part of the ISS National Lab to help astronauts take pictures of Earth that will be of the greatest value to scientists and the public, and to make those images freely available on the Internet. Additional images taken by astronauts and cosmonauts can be viewed at the NASA/JSC Gateway to Astronaut Photography of Earth. Caption by William L. Stefanov, Jacobs/ESCG at NASA-JSC.

The crater was formed by a meteor impact less than 70 million years ago, during the “Age of Dinosaurs.” 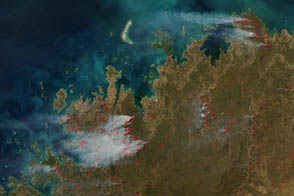