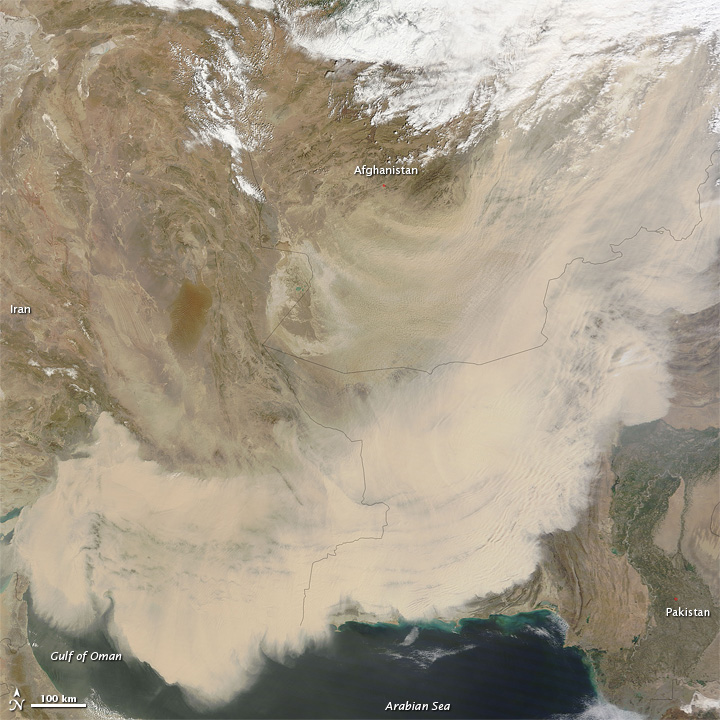 Dust storms have been raging across southwestern Asia and the Middle East in mid-March 2012. Intense dust events spanned thousands of kilometers from the Red Sea to Afgashistan, and from the Arabian Peninsula to India. Earlier in the month, dust was on the move in Iraq and Syria and along Africa’s Atlantic and Mediterranean coasts.

On March 19, 2012, the Moderate Resolution Imaging Spectroradiometer (MODIS) on NASA’s Terra satellite captured this natural-color image (above) of a storm sweeping across Iran, Afghanistan, and Pakistan. Some source points are visible in southern Afghanistan, and the dust blew in southeast-northeast arcs. Most of the dust plumes in this storm were thick enough to completely obscure the land and water surfaces below.

A combination of sand seas and impermanent lakes occur along the borders between Iran, Pakistan, and Afghanistan, and the fine sediments there often provide material for dust storms. Winds provide the other necessary ingredient, and hot temperatures can increase the likelihood of dust storms by making air near the ground unstable.

According to Gulf News, several meteorologists characterized the dust activity as a “super sandstorm.” The cause of the storms was likely the convergence of two different weather fronts. The first carried dust from Iraq and Kuwait, and the second front stirred dust in southeastern Iran. 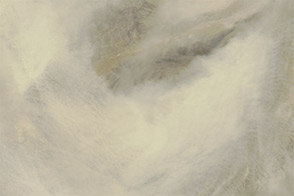 Dust blew over parts of Iran, Afghanistan, and Pakistan in early June 2012.

This natural-color image from July 4, 2009, shows thick dust over much of Iraq and along the southern coast of Iran. Thinner dust appears over northern Iran and southern Iraq.