What did John Glenn see? 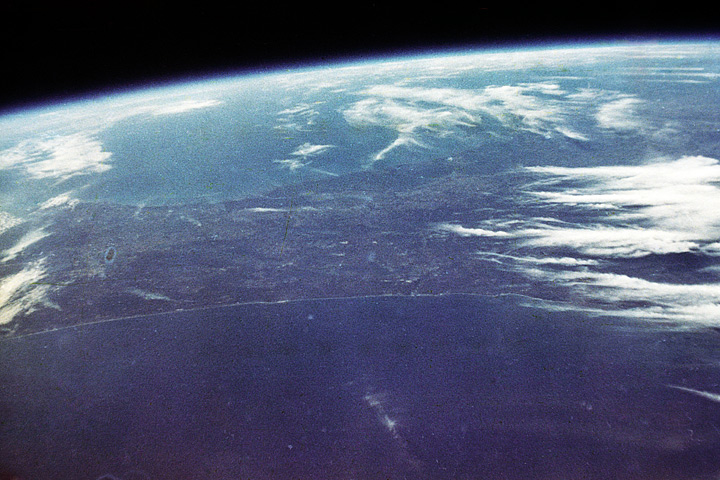 Fifty years ago, on February 20, 1962, John Glenn became the first American to orbit the Earth. He also was one of the first humans to study the planet from space.

Just 5 minutes and 44 seconds after launch, Glenn offered his first words about the view from his porthole: “This is Friendship 7. Can see clear back; a big cloud pattern way back across towards the Cape. Beautiful sight.”

Three hours later, at the beginning of his third orbit, Glenn photographed this panoramic view of Florida from the Georgia border (right, under clouds) to just north of Cape Canaveral. His American homeland was 162 miles (260 kilometers) below. “I have the Cape in sight down there,” he noted to mission controllers. “It looks real fine from up here. I can see the whole state of Florida just laid out like on a map. Beautiful.”

Glenn rocketed into space atop an Atlas rocket in a spacecraft dubbed Friendship 7. He reached a speed of 17,500 miles per hour as he made three orbits and traveled 75,679 miles in just under five hours. Along the way, he saw a dust storm and fires in Africa. He observed the glow of moonlight on the cloud tops and the ocean. He saw the wake of a ship and the different colored waters of the Gulf Stream. He saw a “brilliant blue band” on the horizon—the thin, fragile atmosphere of Earth.

In his official report written after the mission, he offered some highlights:

It was surprising how much of the earth's surface was covered by clouds...The different types of clouds—vertical developments, stratus clouds, and cumulus clouds—are readily distinguished...Only a few land areas were visible during the flight because of the cloud cover...

Just off the east coast of Africa were two large storm areas. Weather Bureau scientists had wondered whether lightning could be seen on the night side, and it certainly can...Lightning could be seen flashing back and forth between the clouds, but most prominent were lightning flashes within thunderheads, illuminating them like light bulbs.

After splashing back down in the Atlantic Ocean near Grand Turk Island, Glenn described his flight with understated eloquence: “It was quite a day. I'm not sure what you can say about a day in which you see four beautiful sunsets in one day, but it's pretty interesting.”

Fifty years ago today, the first American to orbit the planet took this photo of home.

Appears in these Collections:
Astronaut Photography
Earth from Afar

Global Views of Our Planet, Then and Now

Before there was a Blue Marble photograph or composite image of Earth, there was TIROS IX.

Keeping on the Sunny Side of Earth

Storms and a lunar eclipse are a few of the phenomena visible in animations of Earth’s full disk.

This stunning photo came back to Earth with the Apollo 8 astronauts in late December 1968.

The Lunar Reconnaissance Orbiter captured this remarkable shot of Earth—with Mars in the distance.